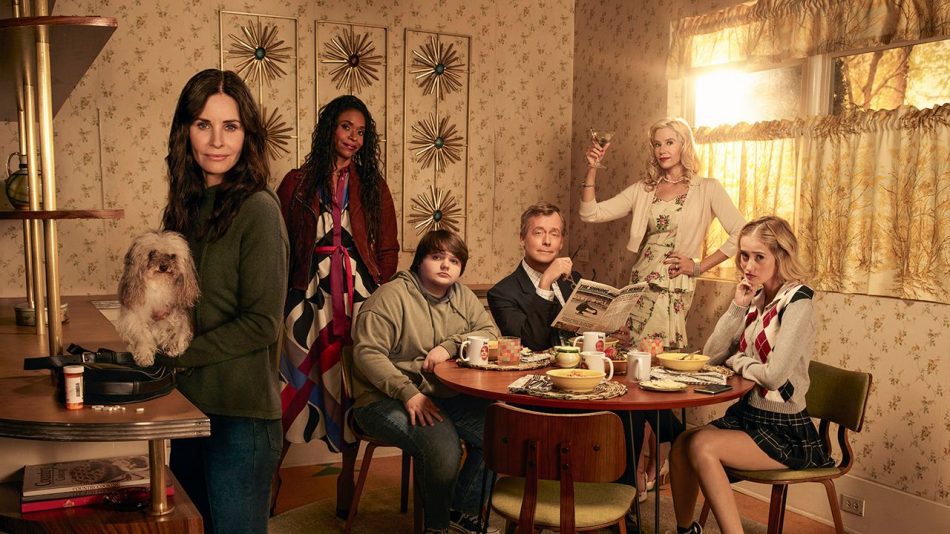 STARZ today announced that the new genre-bending horror comedy “Shining Vale” will premiere on Sunday, March 6, 2022 at 10PM ET/PT across all STARZ platforms in the U.S. and Canada, and will air day and date internationally on the STARZPLAY premium streaming platform across its complete footprint in Europe, Latin America and Japan.

About “Shining Vale”
Pat and Terry Phelps (Cox and Kinnear) cash in their life savings and move from a cramped apartment in Brooklyn, to an old Victorian mansion in Shining Vale, Connecticut as a last-ditch effort to save their marriage after Pat’s torrid affair with Frank, their young hot handyman who came over to fix the sink while Terry was at work. To make matters worse for Terry, Frank never fixed the sink, yet still charged him for it!

Moving to small-town Connecticut, Gaynor and Jake, are pissed and as disconnected as you can get. Terry tries to unite the family, but the pushback is real. Pat is losing what little handle she’s had on the kids, Gaynor wants Pat dead, and Jake has become a zombie from his addiction to screens, while Terry is too consumed with moving on to see that Pat is losing a grip on herself as well.

Buying a 200-year-old house that was on the market for almost three years and sold for more than $250K below asking seemed like a good idea on paper, but Pat senses that the Phelps are not alone; especially when an old-fashioned-looking woman appears hovering outside their family room window.

The Phelps quickly learn why the agents were so motivated to sell the house for a fraction of the asking price. Seems a few details were glossed over, including a triple murder-suicide and a host of other atrocities they neglected to mention. But neither Terry nor the kids seem to notice that something is horribly wrong with the house; only Pat can see things move and hear the bumps in the night. Convinced she’s either depressed or possessed – turns out the symptoms are exactly the same – she’s also the only one who sees the spirit of the person who committed these murders: Rosemary, a Fifties housewife who may or may not be trying to take over Pat’s body.

Everyone has their demons, but for Pat Phelps, they may be real.

“Shining Vale” is executive produced by Jeff Astrof from Other Shoe Productions, Sharon Horgan and Clelia Mountford (“Motherland,” “This Way Up,”) from Merman, Aaron Kaplan (“The Chi,” “The Neighborhood”) and Dana Honor (“A Million Little Things,” “The Unicorn”) from Kapital Entertainment. Courteney Cox is producer. Astrof wrote the pilot teleplay, from a story by Horgan & Astrof. The series is produced by Warner Bros. Television and Lionsgate Television in association with Other Shoe Productions, Merman and Kapital Entertainment.

“Shining Vale” will air on STARZ in the U.S. and Canada and on its international streaming platform STARZPLAY across Europe, Latin America and Japan.

About STARZ
STARZ (www.starz.com), a Lionsgate company, is a leading global media streaming platform committed to delivering premium content that amplifies narratives by, about and for women and underrepresented audiences. STARZ is home to the highly-rated and first-of-its-kind STARZ app that offers the ability to stream or download STARZ premium content, as well as the flagship domestic STARZ® service, including STARZ ENCORE, 17 premium pay TV channels, and the associated on-demand and online services. In 2018, STARZ launched its STARZPLAY international premium streaming platform to provide subscribers access to the “best of global SVOD.” STARZPLAY, coupled with its STARZPLAY ARABIA joint venture, has expanded its global footprint into more than 55 countries throughout Europe and Latin America along with Canada, Japan, India and Indonesia. STARZ and STARZPLAY are available across digital OTT platforms and multichannel video distributors, including cable operators, satellite television providers, and telecommunications companies around the world. In February 2021, STARZ launched #TakeTheLead, a multi-faceted and innovative inclusion initiative expanding its existing efforts to improve representation on screen, behind the camera and throughout the company.

About Lionsgate
Combining the STARZ premium global subscription platform with world-class motion picture and television studio operations, Lionsgate (NYSE: LGF.A, LGF.B) brings a unique and varied portfolio of entertainment to consumers around the world.  Its film, television, subscription and location-based entertainment businesses are backed by a 17,000-title library and the largest collection of film and television franchises in the independent media space. A digital age company driven by its entrepreneurial culture and commitment to innovation, the Lionsgate brand is synonymous with bold, original, relatable entertainment for the audiences it serves worldwide