Stone Sour’s latest release is a concept double album, ‘House of Gold & Bones, Part 2’.  It is a strategy that has its roots with such albums as Rush’s ‘2112’, or Queensryche’s ‘Operation Mindcrime’, and takes the concept a step further by including an accompanying graphic novel or comic book series to complement the story of the music and lyrics.  With that in mind, I am going to concentrate on the music exclusively in this review, and avoid delving into its storyline and appeal. 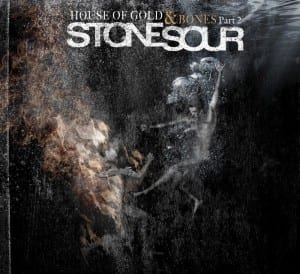 Although I am familiar with Slipknot’s music, I am less familiar with the works of this band, Stone Sour.  As a comparison, I have come to appreciate the melodic qualities of the vocals, lyrics and guitar work overall with this band, as opposed to the work of Slipknot, which offers a different appeal altogether.  To say that the rhythm sections are two different entities would be an understatement of great proportions.

The second part of “House of Gold & Bones” shows that the band is eager to stretch their musical abilities a little bit more than the first half of this two-part album.  Jim Root and Josh Rand provide some deft guitar work, while vocalist, Corey Taylor plays piano on a few of the tracks.  Rachel Bolan from Skid Row played all of the bass tracks on this album, so you will have to wait to catch them on tour to see Johny Chow playing with the band.

HGB2 is heavy, but has melodious tracks on this half as well.  ‘Red City’ starts the album off with a melancholy vocals and piano number that is almost haunting in its effect.  The vocals are smooth and almost sweet in the beginning, and as the band joins in, it builds intensity with the booming drums and the orchestrations that fill the background without overpowering the vocals or the melody in the song.  Once ‘Black John’ kicks in, you find the band up to their usual strength of force with Roy Mayorga’s thunder drumming leading the way for the bright and passionate vocals of Corey Taylor.  I really enjoyed the guitar work on this track, particularly the tone – it is just so crisp and crunchy – there is nothing muddy about it.

‘Sadist’ offers one of the more somber sounding songs on the album, and it manages to create a mood as well as paint a picture with the lyrics and the story.  Corey once again demonstrates his uncanny ability to sing, and not just scream his way through the album.  The kind of vocal control required, and the almost gymnastic quality to his voice on this track are to be respected and commended.  The rest of the band also exhibits their ability to do more than just burn up the speed licks.  They are musically sound on this release, and their ability shines especially bright on this track.  ‘Peckinpah’ is much the same in that it is very intense, and the mood it creates is almost palpable when you listen to it, until it launches itself into a double-bass frenzy that pushes you head first into the very melodic chorus.  This is complicated music, very orchestral in its arrangement, and the guitars are worthy of the great metal masters of past and present.

The production value of this release is just amazing.  The arrangements are classical, almost operatic in their intricacies, and the individual performances are virtuosic in their execution and musical intensity.  Whether you buy into the concept album story line is your personal choice.  Regardless of that, you cannot deny that the writing and performances that go into the creation of this two-part album are nothing short of phenomenal.  The time signature changes in the beginning of ‘Gravesend’ are just subtle enough just to be barely noticed, but interesting enough to take note of them.  The song is a rollercoaster ride, as is the entire album.

‘82’ is a more straightforward hard rocker that gets moving from the get-go, and the drums and pulsing bass pushes the groove forward, and the guitars buzz along like a hive of angry hornets.  This is a track that should be found by program managers to be very radio friendly, and could garner Stone Sour more of that coveted airplay, and therefore more exposure to a wider potential audience.

‘The Uncanny Valley’ is a mid-tempo rocker that has some very nice acoustic guitar work in it that creates an openness to the sound that befits the title.  The electric guitar work is nice as well, complementing the vocals with a counter-melody I much enjoy.  This track is another solid, radio-friendly song that should get greater exposure to a larger audience for Stone Sour.  Gaining new fans while keeping the current fans interested is the name of the game, after all.

‘Blue Smoke’ is what I like to call ‘headphone music’, in that there is so much going on – little subtleties that you miss with ambient speakers, that you simply must listen to this track with a pair of good, noise-cancelling headphones to fully appreciate all that is going on in this track.  Pink Floyd’s ‘Run Like Hell’ comes to mind instantly when you hear the bass start off in its syncopated run that builds up to a fury with the full band jumping in on “Do Me a Favor’ to pound your brain into submission.  The slamming drums and bass in concert with the guitars crunching bring instant satisfaction to your ears.  The time signature changes in the guitar lead and bridge heading back into the chorus are really cool, and change the feel and tone of the song in an unexpected way.

‘The Conflagration’ is a very nice rock ballad that does justice to the genre without being sappy or overly orchestrated.  It has a good guitar lead that fits the song; the piano parts are subtle and still add to the feel of the song.  The vocals are sung in earnest and have a feel and passion to them that are believable.  The last track on the album, ‘House of Gold & Bones’ is an appropriately aggressive and heavy ending to this odyssey the band has taken you, the listener on.  The lyrics are defiant and upbeat, declaring that the protagonist will continue to be his own man, having learned how to do more than just survive along the way.  It is an appropriate end to an excellent journey of sight and sound.  After listening to this album from start to finish, several times, I have come to really appreciate and respect the writing and performance abilities of the band as a whole, as well as their talents as individual performers.  I would recommend this, as well as the first part, to anyone.  I give it 4.5 out of 5 Skulls…