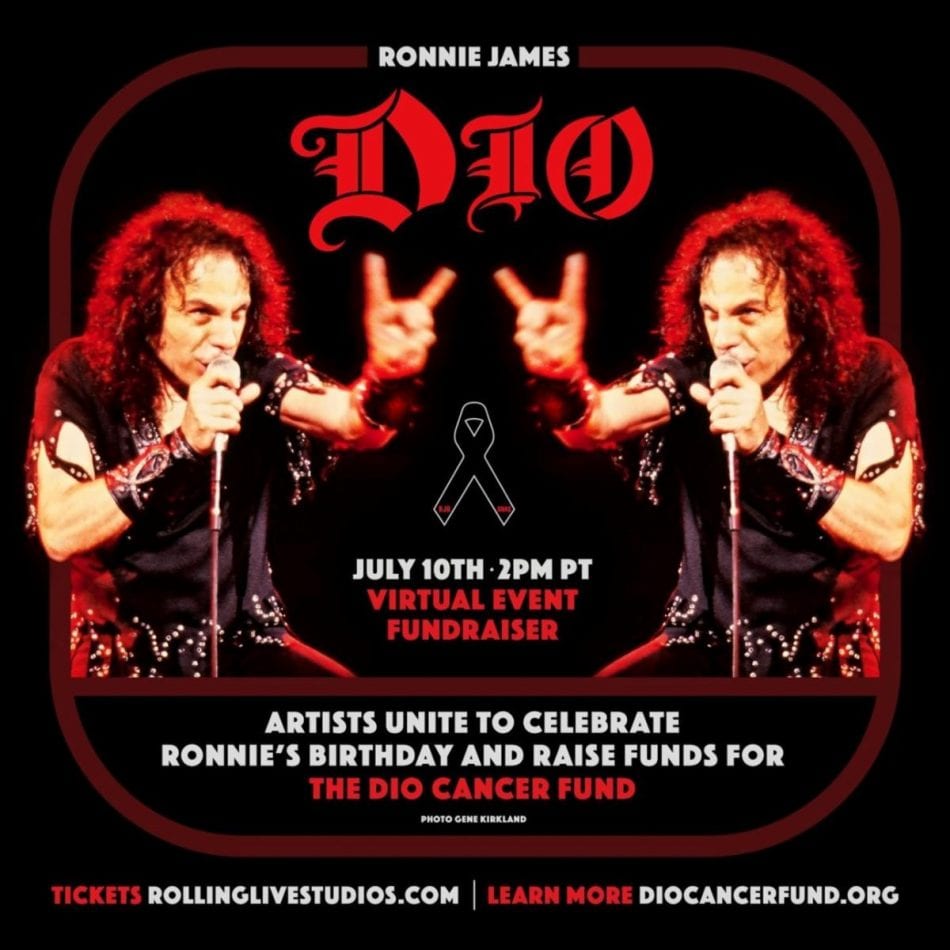 Also participating will be members of the Dio band–Simon Wright, Oni Logan, Scott Warren, Bjorn Englen and Rowan Robertson, who will also appear with fellow castmate Paul Shortino (Rough Cutt) from the Las Vegas production “Raiding the Rock Vault.” Radio and television personalities Eddie Trunk and Matt Pinfield be on hand during the broadcast conducting interviews with artists as well as with Dio producer Wyn Davis and Ronnie’s widow and long-time manager Wendy Dio.

The STAND UP AND SHOUT FOR RONNIE JAMES DIO’S BIRTHDAY virtual event will feature brand new performances and stories from Ronnie’s friends and fans, as well as exclusive archival footage from Dio’s life and long-spanning career, and never-before-seen footage from Dio Cancer Fund events held in Los Angeles since 2011 when the organization began.  Through musical performances and storytelling, a wide array of guests will celebrate the life of a man who deeply influenced their lives through his artistry and larger-than-life presence.

Throughout his career, Ronnie James Dio was a passionate supporter and contributor to charitable work and numerous animal charities. He was an artist who was not only well respected for his talent, but also admired and loved by his peers and fans worldwide, some of which included renowned celebrities, musicians, and prominent individuals from all walks of life.

Tickets go on sale today (June 9) at https://rollinglivestudios.com/dio with General Admission tickets priced at $20 (Early Bird general admission tickets at just $15 are available through June 16). In addition to tickets to view the show, Rolling Live Studios will offer special merchandise packages and virtual VIP experiences for fans to take part in this unusual worldwide event. Included among the value-added items is a specially designed event tee-shirt, baseball cap and laminate plus “grab bags” of vintage DIO and Dio Cancer Fund event merchandise. Ticket packages that include access to a Pre-Show Virtual Meet & Greet and a Post-Show Virtual VIP Party are also available.  Additionally, a limited number of copies of RAINBOW IN THE DARK: THE AUTOBIOGRAPHY, written by Ronnie James Dio (with Wendy Dio and Mick Wall) and signed by Wendy Dio, will be made available prior to its publication and availability to the public on July 27.

The Ronnie James Dio Stand Up and Shout Cancer Fund (www.diocancerfund.org), dedicated to cancer prevention, research and education, has raised over $2 million in its history. The organization’s last in-person event was its 10th Anniversary Gala held at the Avalon in Hollywood in February, 2020. Its annual RIDE FOR RONNIE Motorcycle Ride and Concert and BOWL FOR RONNIE Celebrity Bowling Tournament have been suspended as the result of the Covid-19 pandemic.

STAND UP AND SHOUT FOR RONNIE JAMES DIO’S BIRTHDAY is the latest in a lineup of stellar events produced by Rolling Live Studios. In January, the studio worked alongside Mike Garson to bring together an extraordinary slate of vocalists to perform with David Bowie’s band alumni for “A Bowie Celebration: Just for One Day” streaming concert event.  The following month, YUNGBLUD’s stunning performance of “Life on Mars?” from the event played after millions of viewers watched NASA’s Perseverance rover successfully touch down on Mars.

About The Ronnie James Dio Stand Up and Shout Cancer Fund:

The Ronnie James Dio Stand Up and Shout Cancer Fund is a 501(c)(3) non-profit charitable fund formed in honor of the legendary Ronnie James Dio, who lost his life to stomach cancer on May 16, 2010. Cancer is a deadly disease that robs families of loved ones, and the Dio Cancer Fund is dedicated to support cancer prevention research, raise awareness and educate the public with the focus that early detection and prevention saves lives.

Monies raised have been committed to the cancer research work of the T. J. Martell Foundation for Cancer, AIDS and Leukemia Research, the gastric cancer research unit of the M.D. Anderson Cancer Center in Houston, where Ronnie was treated for gastric cancer during the last six months of his life, and other cancer research projects. Since 2016, the Dio Cancer Fund has also committed funds to support the research of Dr. David Wong and his team at the UCLA School of Dentistry in developing a simple, non-invasive saliva test for the early detection of cancer, which is in keeping with the Fund’s mission of cancer prevention, research and education.

Rolling Live Studios takes virtual live events to the next level. Since its inception, Rolling Live Studios has produced over 75 live virtual events and helped raise over $27 million in donations for an array of charities. Recent credits include Jeffery Katzenberg’s Virtual “Evening Before,” Chrysalis Night In – Virtual Gala, Richard and Demi Weitz’s RW Quarantunes, The Elizabeth Taylor’s AIDS Foundation Virtual pre-show and multiple livestreams for The Recording Academy.  Rolling Live Studios was founded by Kerry Brown, who has managed and produced multi-platinum artists (The Smashing Pumpkins, Miley Cyrus, Cheap Trick, among others), feature films, television, and video games (Blow, Along Came Polly, Scream, The Academy Awards, and more). Kerry produced the live multimedia show BLACKOUT, a collaboration between PepsiCo and the NFL to celebrate the Superbowl, and His Holiness the Dalai Lama’s 80th birthday party, among other live events.