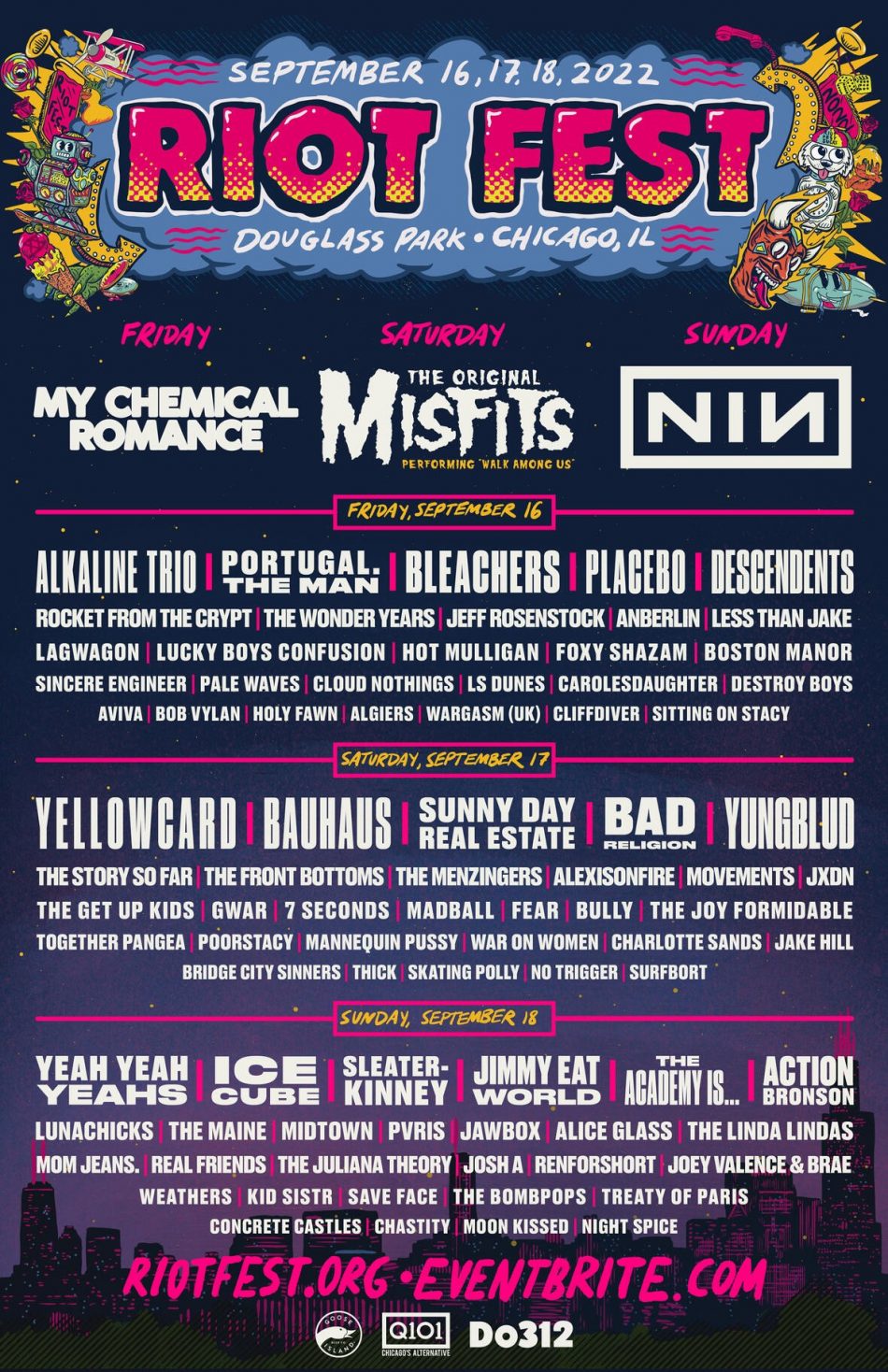 CHICAGO, IL: Riot Fest—one of the largest remaining independent festivals in the country—is ready to return to Douglass Park this fall. The festival has just revealed a jam-packed lineup, spread across three days (September 16–18) and five stages, that is rich in punk, indie rock, hip hop, goth, industrial and more.

Attendees will also enjoy reunion sets from Yellowcard (performing their sole 2022 show at this year’s Riot Fest), The Academy Is… and Midtown—as well as returning punk heroes like Alkaline Trio, Bad Religion, and Descendents, hip-hop acts like Ice Cube and Action Bronson, and fest favorites Sleater-Kinney, Jimmy Eat World, The Front Bottoms, and The Wonder Years. Over 85 bands will play across 3 days and 5 stages.

QUOTE FROM FESTIVAL FOUNDER MIKE PETRYSHYN:
“I think this year’s lineup really speaks to who we are; it’s been a minute since we’ve gotten to curate a lineup like this. I’m especially excited for what this is leading into: the stuff that’s happening in the next few weeks, and the years to come.”
Tickets will go on sale today (Wednesday, May 11) at 10:00 a.m. CDT; 1-Day, 2-Day, and 3-Day passes will all be available.

Founded in 2005, Riot Fest is an independent music festival featuring the best of punk, rock ‘n’ roll, hip hop, metal, alternative, and just about everything in between. Founder Riot Mike is credited with helping to reunite iconic bands like Naked Raygun, the Replacements, The Original Misfits, and Jawbreaker, among many other reunions—a staple of Riot Fest, alongside full album performances, carnival rides, and the occasional butter sculpture. Riot Fest is independently owned and curated with quirky, original attractions; in 2016, it was named #1 Music Festival by USA Today, and in 2021 it was voted Best Music Festival in a poll for Chicago Reader. In addition to the festival, Riot Fest promotes shows year-round at a myriad of music venues across Chicago.