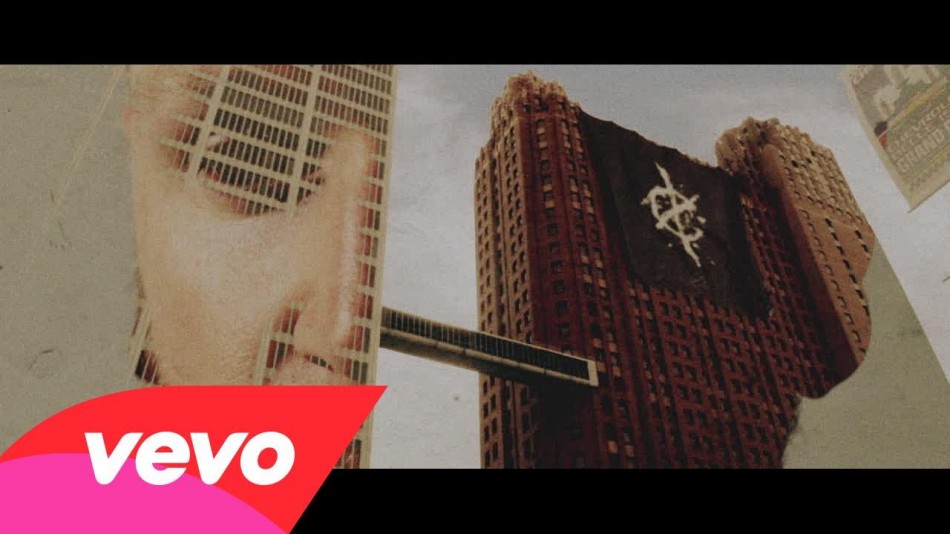 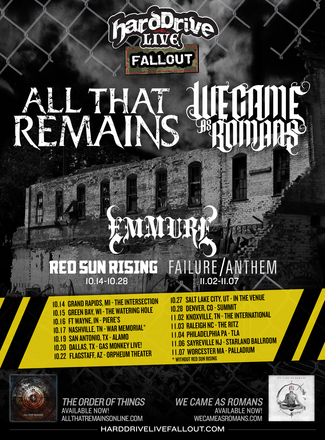 (New York, NY) – We Came As Romans and All That Remains will co-headline the HardDrive Live Fallout Tour this Fall. The tour kicks off on October 14th in Grand Rapids, MI and will run through November 7th (Dates below with more shows to be announced soon). Emmure will be direct support for the entire tour. Red Sun Rising will open from October 14th through October 16th and October 19th through October 28th. Failure Anthem will open from November 2nd through November 7th. Tickets will be available Friday August 28th at 10:00 AM local time at www.Harddrivelivefallout.com.

We Came As Romans vocalist Dave Stephens comments, “We’ve known ATR for almost as long as we’ve been a band and we’re ecstatic we’ve finally got a chance to tour together. It’s an idea we’ve always talked about so we figured why not finally make it happen. It’s a true blessing to be on tour with these bands and be a part of the HardDrive Live Fallout Tour.”

All That Remains lead vocalist Phil Labonte adds, “ATR is excited to announce we’ll hitting the road with We Came As Romans and working with HardDrive again this fall. Last time we did a “HardDrive Live” Tour was in 2008 and we had a great time! We expect the same this time! VIP packages will be available so get your tickets early!!”

Emmure’s Frankie Palmeri comments on the upcoming tour, “We are happy to hit the road again with our friends We Came As Romans and All That Remains.”

All That Remains continues to tour in support of their latest studio album, The Order Of Things, which was released this past February via Razor & Tie and is available on iTunes here: geni.us/allthatremains. The band recently released the music video for their current single “For You”.

The song is now Top 15 at Active Rock Radio and still climbing. Their seventh studio album The Order Of Things debuted at #25 on the Billboard Top 200 with over 19,000 units sold in its first week at retail. This marks the band’s fourth Top 25 Album debut to date. All That Remains has dominated rock radio for years now with previous hit singles, “Stand Up” ascending to #1 at Active Rock radio and “What If I Was Nothing” landing at #2. ATR’s worldwide album sales now exceed over one million, while track sales surpass 1.5 million. Led by the outspoken and controversial front man Phil Labonte, All That Remains continues to lead the charge in the rock music scene with their latest release. Since 1998, All That Remains continue to progress, while clenching steadfast to the principals that etched their place at the forefront of 21st century hard rock. The Massachusetts outfit is Phil Labonte (vocals), Oli Herbert (guitar), Mike Martin (guitar), Jeanne Sagan (bass), and Jason Costa (drums). http://allthatremainsonline.com/

We Came As Romans recently released their highly successful self titled album on July 24th, 2015, which debuted at #8 on the Billboard Top Current 200. This marks the second time the band has debuted in the top eight of the Billboard Top Current 200. In addition, the new album secured the #2 spot on both the Hard Music and Independent Charts, as well as the #8 most streamed album on Spotify. The album, which was recorded with multi-platinum award winning producer David Bendeth (Bring Me The Horizon, Paramore, Of Mice and Men), can now purchase it via MerchNow and iTunes. The lead single, “The World I Used To Know” is currently at #40 on the active rock charts. The band recently released the official music videos for “The World I Used To Know”, which can be seen here: http://bit.ly/1f3Xe8d and “Regenerate”, which can be seen here: http://bit.ly/1ImI99w. Composed of vocalists, David Stephens and Kyle Pavone, guitarists Joshua Moore and Lou Cotton, bassist Andrew Glass and drummer Eric Choi, We Came As Romans have already seen massive success with their first two full-length albums To Plant A Seed and Understanding What We’ve Grown To Be each topping 100,000 sales in the US alone. Their most recent release, Tracing Back Roots topped the Billboard charts coming in at #8 on the Billboard 200. The album also charted #1 Independent Album, #1 Internet Album, #1 Hard Rock Album and#2 Top Rock Album. The band’s recent live DVD release Present, Future, and Past debuted #1 on the Billboard DVD charts, beating Metallica for the top spot. www.wecameasromans.com

Back on the road, Emmure, lead by their hot-blooded, combative frontman, Frankie Palmeri, is ready to remind the world what heavy-hitting metal is all about. Performing in support of their latest, sixth-studio album, Eternal Enemies, released April 2014 via Victory Records, this is Emmure at their heaviest, applauded by Alternative Press for their “collection of pavement-saw riffs, jackhammer drumming, and filling-loosening squeals.” Debuting as #4 in the Top Hard Rock Albums chart, and #57 on the Billboard 200, Eternal Enemies is a culmination of perfectly timed breakdowns, impassioned lyricism, and a live performance beyond reproach. The only band ever to be asked to perform for thousands on the Rockstar Mayhem Festival two years in a row, Emmure have been steadily collecting a loyal legion of fans since their inception in 2003 out of Queens, NY, and have only just begun. The five-piece is comprised of vocalist Frankie Palmeri, bassist Mark Davis, guitarists Jesse Ketive and Mike Mullholland, and drummer Adam Pierce. Grab Eternal Enemies today on iTunes here: http://apple.co/1ggRD7X and keep your eyes peeled for Emmure announcements at: https://www.facebook.com/emmure.

Alternative rockers Red Sun Rising are touring in support of their debut album, Polyester Zeal, which was released on August 7th via Razor & Tie and debuted on Billboard’s Heatseeker’s Chart at #7. The album is available on iTunes, Spotify and record stores everywhere- iTunes here: http://geni.us/redsunrising. The band recently released a gritty music video for their current radio single “The Otherside”.

The track has been rising up the Active rock radio charts, already reaching the Top 10. The album was produced by powerhouse producer Bob Marlette (Black Sabbath, Shinedown, Seether). The Akron, Ohio natives completed a knockout tour with Nothing More and are currently on the road with Pop Evil as well as select festival dates. Red Sun Rising continue to stun audiences with their commanding stage presence and sound. After the band’s recent performance at Rock on The Range, Loudwire raved “Musically, melodically and vocally Red Sun Rising are a band to give a listen to and their live performance enriches their sound tenfold. Their new song “The Otherside” is truly infectious and it’s one you’ll have on loop for days.” Red Sun Rising is Mike Protich (vocals/guitar), Ryan Williams (guitar), Tyler Valendza (guitar), Ricky Miller (bass/vocals), and Pat Gerasia (drums). www.redsunrisingmusic.com

Failure Anthem recently signed to Razor & Tie and will release their debut album First World Problems in early 2016. The album was produced by Drew Fulk and guitarist Kile Odell. The video for the track “Paralyzed” has already had over 120,000 views.

“Paralyzed” impacts rock radio on November 2nd and can also be purchased on iTunes here: http://geni.us/failureanthem. The Greensboro, NC quintet—JD [vocals], Ryan [bass, backup vocals], Kile [guitar], Zane [drums], and Wil [rhythm guitars]—architect eleven impactful, invigorating, and infectious anthems with hooks so robust that modern bells and whistles just aren’t necessary. It’s a tried-and-true approach that feels timeless as the boys make hard rock hypnotic again. Formed in 2013, the band has been touring and building a fanbase nationwide playing such rock festivals as Carolina Rebellion and supporting such acts as Halestorm and Scott Stapp. They are on the road with Texas Hippie Coalition this summer. facebook.com/FailureAnthem