Electronic gear market technology seems to take off faster than consumers have time to absorb. Flash back to my article on PreSonus Studio Live mixers that embraced the first release of the Studio Live digital mixers. I had picked up a 24.4.2 mixer which handled larger gigs and a lot of home recording, while the 16.0.2 mixer was smaller and works great for live use for a typical four-piece rock band and is small enough for a coffee house acoustic gig.

These PreSonus Studio Live mixers made so much of my older technology gear obsolete, from PA mixers to all prior home-recording gear. At the time, it was quite the undertaking to recycle all the older gear on the used market and come up to speed on the new technology. What was nice about these Studio Live, or thesecond series of Active IntegrationTM (Ai) technology mixers, is that they both share hands-on knobs that twist as well as Mac or PC apps for controlling the mix and allowing deep, faster editing, as compared to diving into knobs and menu screens from the mixer directly. Granted, the 24.4.2 mixer has some features that the 16.0.2 doesn’t, and the 24-channel board is larger, which made traveling with it a bit problematic.

Now, only about two years since Studio Live’s original debut, PreSonus has released the new RM- series Studio Live mixers: the RM16Ai and the RM32Ai. These mixers embrace modern technology yet require a slight leap of faith in the fact that there are no knobs, and the units are 100 percent controlled by the Mac or PC controller of your choice, from iPhones and iPads to the newer touchscreen PCs. Those of you who have been raised on iPads will find this a pretty painless transition; whereas, someone used to old-school analog mixers may sweat the details a little more — with the absence of real knobs to twist in a panic moment — until you get to know and trust the new RM mixer. 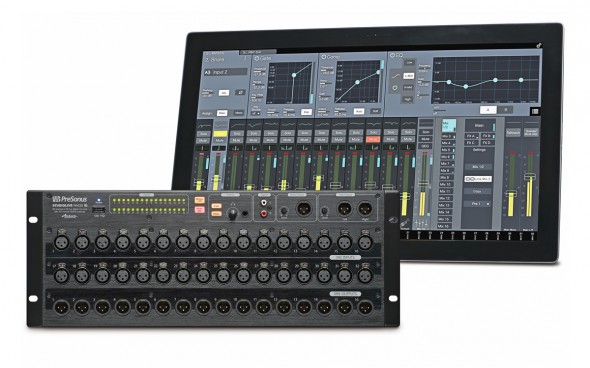 Today’s modern gear is aimed at size and performance. It’s smaller, more powerful, has far fewer external accessories and has faster setups loaded with presets and scenes to save for fast recall, not to mention the multitrack live recording capability, plus some wireless features for control connectivity to the speakers you use.

When I look at the new RM series of mixers, it’s clear the engineers were smart. For those of you who embraced external controllers like an iPad for live mixing and deeper editing, it makes perfect sense to follow that trail and essentially get rid of the large mixer and all those moving components like menu screens, knobs or faders that could break or eventually wear out. Plus, the earlier mixers need to be somewhat close to the stage or on stage, or require a snake to extend mike cables and get the mixer where you can operate it without stage interference.

Downsized components at a remarkable price

Separating or splitting the “Starship Enterprise” in half was essential. This downsized the mixer by a long shot, allowing the mixer to become a big patch bay for on stage, since if you remove all knobs and faders, you are left with nothing but inputs and outputs. In downsizing components, PreSonus has packed in more channels and auxiliary channels to the point where the RM16Ai fits in a three-space rack, and the RM32Ai fits in a four-space rack roughly 10 inches deep, plus the user cost is lower than  the original Studio Live mixers.

The goal of PreSonus has been to allow end users to build a 64-track studio for under $10,000, but wait they even did that for under $5,000, with the RM32Ai selling at $1,999. Link up two RM32Ais, and you have one massive capacity for some serious tracking to live mixing.

With the original Studio Live mixers, you would connect your computer to the board via FireWire and add a WiFi router to connect to all other gadgets for wireless personal monitor mixing via a smart phone and mixing for front of house via an iPad. These newer Ai and RM-series mixers add a network port, so you connect a router directly to the mixer, allowing all other gadgets to be wireless. The only minor issue is there are only two specific WiFi routers on the approved list, so you will have to plunk down about $50 for a dedicated router that you will keep in the rack. This is a small price to pay when you could pay more for a single guitar or microphone cable.

Now you can travel with a 32-channel recording studio as a flight carry on item. SKB has recently released some shallow rack cases and a flight-ready dolly case to hold both the mixer and a laptop that keeps you on the move with minimal luggage http://www.sweetwater.com/store/detail/StudioFlyer4 . Both the RM16 and RM32 are both  32-channel mixers; although, the RM16 only has 16 channels accessible from the main XLR inputs; the other 16 you have to access via the 25-pin break-out port on the rear of the mixer. The RM32 features all 32 channels available via XLR. Each mixer has a full 16 auxiliary channels, which makes performing on large stages and using several stereo in-ear monitors a breeze.

What I really like is how well the software user interface is designed. The “virtual knob world” is not confined to the size of a knob or slider, so more visual aids are available in front of you for live visual monitoring of various levels that an engineer likes to keep tabs on. Everything has a full mixer look, from your normal mixing channels to each auxiliary mix or effects bus. You simply select what you want to control, and the entire mixer’s faders change to show everything you need to control without going through multiple screens or menus to find what you need. You’re always one button away from anything you wish to edit.

For effects, you have four on-board special effects units, which is a plus over the original two effects on the earlier mixers, as sometimes you may want to isolate different effects: two units just for drums and two for vocals. Plus, those already familiar with PreSonus mixers know about the Fat Channel. The Fat Channel is available on every channel — auxiliary or main — and features all your necessary gates, limiters, compressors and graphic EQ to parametric EQ that would have filled a lot of external racks full of gear in analog days. This really helps tailor each channel for a very special use, and you can name the channels and auxiliaries, and add an icon for Vocal Mic , Electric Guitar, Snare, Kick, Overheads, Horn, Bass, etc. This virtual label maker saves to the scene preset for fast recall.

Engineers using real-time analyzers to read and EQ to a room is something I really haven’t seen since the 80s or 90s, when it seemed like local bands rather lost the “real” soundman. PreSonus builds in Smaart measurement technology into their boards, where on setup, you simply plug in a flat reference mic  and run a white-noise app that automatically presets the board’s main EQ to the room, which you can name and save into any of the mixer’s many preset locations for recall.

Control of up to 16 devices

You can add up to 16 devices to the mixer, so the players could use their smart phone to control their personal monitor mix or the sound person might set up multiple devices, each to control a different parameter. For example,  an iPad could handle effects or global monitor mixing, whereas a laptop or larger touch-surface device may handle the main mix. You can assign each device to control specific things, so players don’t accidentally screw with another player’s mix.

Word of warning: With all new aggressive technology, sometimes it has shortcomings. For example, I decided to upgrade my computer to a Macbook Pro that came with the newest Yosemite operating system. Unfortunately Mac doesn’t let any developers in on their new technology until Mac releases it, so for me this turned into a situation where I can use the mixer all I want live, but I cannot connect with FireWire to live record anything until the PreSonus RM updates for Yosemite come out.

Since I am rather stuck in Yosemite and not able to multitrack record with the RM mixer until updates come about, I needed a work around to keep things moving, so I picked up the PreSonus iTwo interface and a PreSonus Fader Port. The iTwo is a two-channel interface that features MIDI, so you can control keyboards to electronic drums for software triggering. The iTwo gets its power via a USB connection to a computer, but it can also be used with an iPad, with the addition of a normal iPad wall charger. Speaker outputs from the iTwo allow monitoring of whatever you need, and phantom power is available for input number one. The iTwo also includes two guitar input pad buttons for proper impedance when tracking a guitar plugged straight into the unit. The Midi interface turns out to be a real winner allowing me to  trigger drum software  through the iTwo  via  a Roland V-Drum kit, so I can record drums in silence and change the drum kit tones during the mix session.

The Fader Port is a simple USB-powered transport control for recording and includes a flying fader with an added power supply that you can use to program automation tracks or to manually control any channel. This allows you fast control of the recording process, freeing up the need to use a mouse too much and allows a fast punch in and marker location to access a variety of menus on the fly. 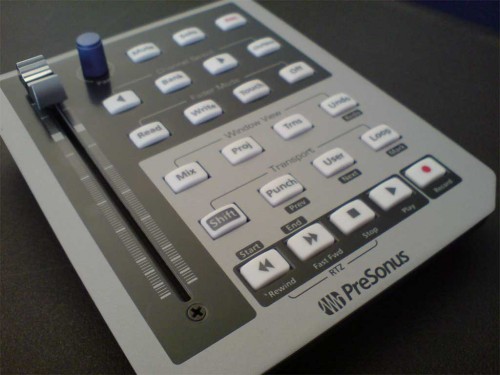 Best of all: With the purchase of any PreSonus device, you get their recording software Studio One 2 Artist (a free Studio One 2 version is available with no purchase required), and upgrades between version levels is about $99 on the average. What I like most is having our band all on the same platform, so each member can track at home or play with mixes, lay down new ideas and share them very quickly by making use of online storage such as DropBox or thumb drives. Engineers do record albums with this software, so it is not an entry-level software; it’s very capable of giving ProTools and others a serious run for their money without a gouging price tag. PreSonus has tons of online videos for user training that have proven extremely valuable to get users up to speed fast.

Most of all, these RM mixers are best used live and for live recording, and they perform equally well in the home or professional recording studio.

With all this being said, how many musicians still haven’t used a digital mixer, let alone purchased one? This is a great time to dive in. Furthermore, at the speed PreSonus has developed and released new gear and revisions, it makes their prior gear very affordable in the used market. The original Studio Live mixers are badass to say the least, guaranteed to make every band sound their best in comparison to older antiquated gear.

But if you need to reduce size to save space and have a good use for more channels and auxiliary channels, the RM series is about as good as it gets in a small, tidy, extremely powerful package. So many people have no idea what all these Studio Live mixers are capable of, and I truly believe they are the fifth Beatle, the man behind the curtain that makes us all sound and perform better while capturing the moments as often as you hit record.

So hit record as often as possible, it makes us better musicians!