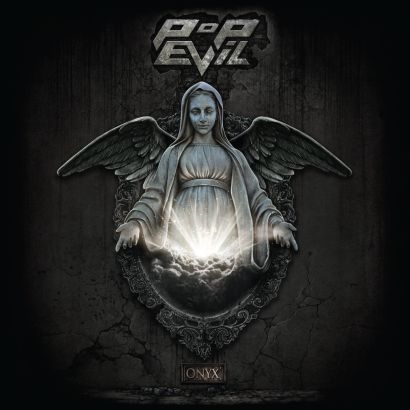 Since they released their last album, War of Angels in 2012, POP EVIL has undergone a couple of serious personnel changes, with the departure of lead guitarist, Tony Greve and drummer, Dylan Allison. The addition of lead guitarist, Nick Fuelling and drummer, Chachi Riot are steps in the right direction for a band that seemed to be trying to figure out whether they wanted to be more pop, or evil. The release of the new album, ONYX, makes it plain that they have chosen the dark side of the force. 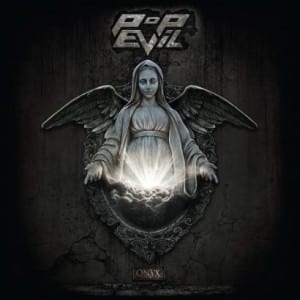 Newest drummer, Chachi Riot reported in a recent interview that this new album has no acoustic guitars on it, and that all of the new tracks on ONYX are up-tempo songs that have a heavier, edgier feel and sound to them. This new album is a departure from the previous, ballad-heavy release, War of Angels, which I reviewed as a mediocre effort by a band that has potential for more than what they were giving their fans, and it seems that someone had the same ideas of where this band could go with their music as I did.

That person was Johnny K. The production work of the Grammy-nominated producer is evident on this album, as the production is more than just a cut above their earlier work, bringing a surer, more mature sound to the album in general, but especially where rhythm sections, guitar leads, drum and guitar tones, and vocal tracks are concerned.

The first track on the new album, Onyx is a song called Goodbye My Friend. The bass line, drum tones, and guitar tones on this track immediately jump out at the familiar listener as being a real departure from their previous album’s sound. The new drum tones are deeper, fuller, and more musical than on previous efforts. The bass tones are also somehow more natural and fuller sounding. The guitar tones of Fuelling add much more of a metal component to this once pop-metal sounding band. This is a good song to start the album with, because it gives the listener an immediate idea of what is to come.

The following track, Trenches has a very cool guitar riff intro that has a menacing quality to it that sets the tone for the song. Riot’s drumming on this is clean and almost minimalistic in his approach, and as they say, sometimes it’s not what you play, but what you leave out that makes the song groove. This song grooves, and showcases the personnel change nicely, as it is a song that is definitely a prime example of the changes that needed to be made, and were courageously undertaken by a band that is hell-bent on being successful.

Trenches has a kind of sass about it, especially where Kakaty’s vocals are concerned. He seems surer of himself on this album, and his approach to his vocals and the lyrics is much more confident and that confidence elevates the rest of the performances on this track. The song grooves well, with a good, driving drumbeat and smartly played bass track. The guitar lead break fits the song well without being overplayed, and is played with authority.

Torn to Pieces is one of two songs that starts slow, and could be called a ballad. Still, this ballad seems more mature and earnest in its lyrics, as well as Kakaty’s vocal performance. You believe this song, and the performances given. This is a very good ballad. Very good. I enjoy the overall feel and tone of this song, as it sound like it was written and performed by someone who went through the emotions that are sung about, and the mood of the song is one of repentance and remorse. Even with the remorseful lyrics, it still has an air of hopefulness about it that brings the song away from their schlock ballad past.

I like the almost-rapped style of the verses on Divide, because they push the song along and give it a fresh sensibility without being forced like in some Limp Bizkit or Linkin Park songs of the last decade. I also like the sparser arrangement of this song because it gives a live feel to the performance and does not muddy up the song with overproduction. Johnny K really puts his mark on songs like this one on this album, and it has been a positive influence on the band’s sound and musical direction.

Beautiful is a song that has an interesting drumbeat and the bass is a nice compliment to that rhythm. It brings a nice groove to the guitar’s counter melody that really works well as a whole. The guitar work on this song is notable for its musicality, especially in the bridge. The song is more pop than evil, but it is a strong addition to the track list for the fact that it shows the band hasn’t abandoned its pop rock roots entirely, but rather has evolved into something more than they started out as.

I have always been impressed by the vocal ability of singer Leigh Kakaty, and Silence & Scars is a song that really shows off his ability to sing, and not just scream through an album. I much prefer someone with not only the ability to growl and scowl through a performance, but someone who can do that when necessary as well as be able to really sing a song with feelings other than rage and anger. This is a great example of Kakaty’s versatility as a vocalist. This song also puts the spotlight on the rest of the group’s ability to do more than bash or pound about. It’s about musical dynamics.

Sick Sense has an interesting intro section that sets a mood for the song as it captures a darker side to their sound. It’s a bit of a plodder, tempo-wise, but it adds to the heavy, dense feel of the song. The arpeggiated guitar riff at the bridge is an excellent counterpoint to the rest of what is going on in the bridge, heading back into the chorus before the end. I like this song.

Fly Away is a straight-ahead rocker, with soaring vocals, an intense guitar hook that is crunchy and chunky like a good metal lick should be. I’m continually drawn to the rhythm section of this new and improved version of Pop Evil, as they kick out the grooves and thrust this song, as well as the band, forward. Drum tones are just wicked fat and deep, and nothing gives me a stiffy quicker than a bass drum that just hits you in the chest! Fly Away is a kick-ass head-banger of a song.

Behind Closed Doors is a strong tune that has an ‘Us against Them’ feel to it, which works well in songs about strained personal relationships. This theme works well in rock music, as it’s something that we all can relate to instantly, and on many levels. Aside from the philosophical aspects, this song has an exceptional guitar lead that may not be the ‘shredder of the month’, but it really fits the song well, and I credit that to the more mature guitar style that Fuelling brings to the band.

Welcome to Reality kicks you in the nuts from the first note, and as the first lyrics are sung, the syncopation of the guitars, bass, and drums takes over. This forceful song drives the listener forward as if being caught in the clutches of a juggernaut. And just when you think that this song is going to drive you over a cliff, it suddenly comes to a halt, everything goes quiet except for some soft vocals in the distance, and just as you think you can catch your breath, it rockets you off into the distance to the end. A cool way to get your teeth kicked in.

Pop Evil ends their newest album, ONYX with a song called Flawed, a song that is a sort of mea culpa , answering for their crimes of not living up to what their fans expected from them, asking for forgiveness, and then making amends with the release of a much stronger, and in the end, better album than they’ve ever released. It is a sort of punctuation mark on the end of one story, and the start of a new one.

ONYX is a great improvement over their previous releases, and if they continue on the new path that they’ve laid out for themselves, then I can envision Pop Evil being around for a long time, and gaining new fans as well as new respect from the music community. For all of the positive changes this band has made since their last release, I give this new effort 7 out of 10 Skulls.