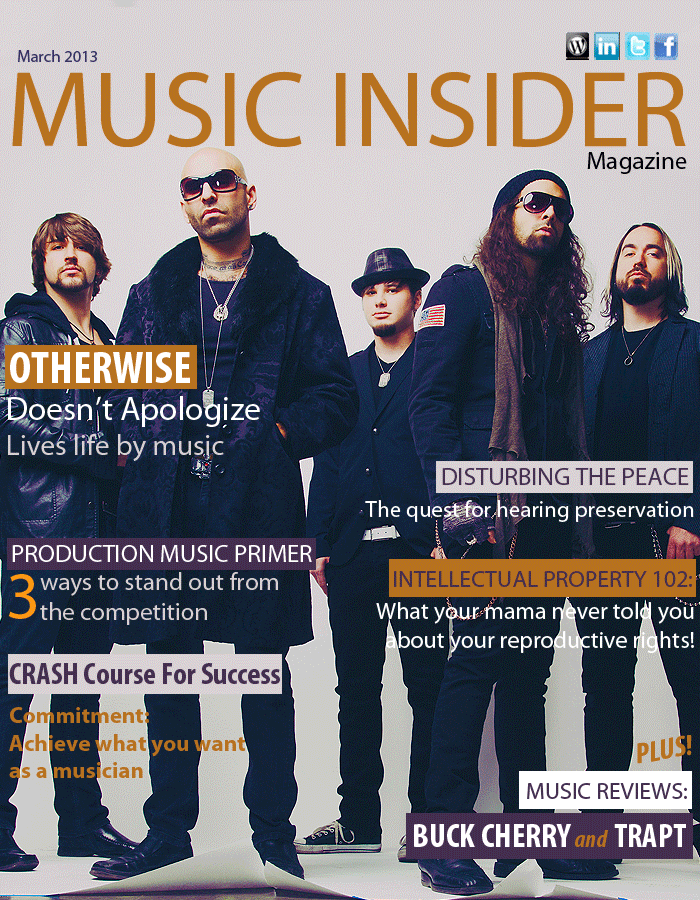 Otherwise — a melodic rock band from Las Vegas may not be well known, but their single “Soldiers” and their newest release “I Don’t Apologize” — both quickly rising on the billboard charts — will soon make the band a household name in the rock music world. Now under the national spotlight, Otherwise are playing alongside Stone Sour and Papa Roach on their current U.S. tour at The Joint, the music venue at the Las Vegas Hard Rock Hotel and Casino, I recently met up with band members Adrian Patrick, lead vocals; Ryan Patrick, guitar/vocals; Corky Gansfird, drums/vocals, Vassillos “V” Metropoulos, bass/vocals; and Andy Pugh, guitars/vocals to find out how they got started and hear their philosophies on making music and on life.

Proft: How did all of you meet and form this band?

Adrian Patrick: Well, I met my brother when he was born in the hospital (laughs). No, my brother and I have been jamming together since 2004, and then Corky was actually recommended to us by a mutual friend, Chris Kale, bass player for Five Finger Death Punch, who gave me his phone number. Corky ended up playing his first show with us on Halloween of 2010, and we were all dressed like idiots and acted like idiots that night, and it was a good time! That’s when I think he decided, “You know what? This might actually NOT suck.”

Adrian Patrick: This is my brother Ryan and his assistant Andy.

Proft: How did Andy come to join the band?

Adrian Patrick: Andy was an old friend of ours, born and raised in Vegas. He’s a very talented engineer and did some work on the first independent release that my brother and I did back in 2006; we knew him through mutual friends. We saw him in the studio all the time, and Corky reached out to him halfway through 2012, during our touring schedule, to come and run sound for us. Being a smart young man, Andy was very forthcoming with the fact that his ultimate goal was not to be our sound engineer, he wanted to be our guitar player. At the time, we were touring as a four-piece and we needed a second guitar part, because that’s the way the album is written, a two-guitar album. So after a little bit of adjusting — we’re still doing some adjusting — its working!

And V over here (Metropoulos the bass player who goes by V) — his father Christos is actually downstairs right now — was our tour manager for a little bit. V came out here from Texas to help his dad out with some things, not even really related to the band. He just showed up one day at our rehearsal spot and said, “Look, I want to be in this band,” so we had him do roadie work for us at first and teching for us, and he proved himself.

Then when the shit hit the fan at the top of our second tour in 2012, our long-time bass player left us with less than two weeks to figure out what to do to get another bass player. He said “I quit” and we had to leave on tour in 10 days. V stepped up to the plate. He’s a very talented musician; he just switched instruments and started playing bass. 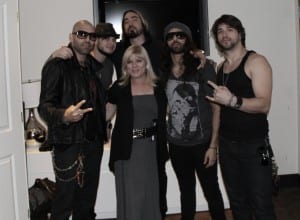 Proft: Have any of you been in any other bands?

Adrian Patrick: Corky has been in every band, ever!

Gansfird: I have been in over 20 bands.

Adrian Patrick: He’s been playing music as long as the rest of us have been alive. Otherwise is the first band that I’ve ever been in. I started Otherwise, and it just took a long time to find the right pieces and the right guys with the right talent and dedication to get to this level, and it’s still just the beginning for us.

Proft: Who is your major songwriter of the group?

Adrian Patrick: We all contribute. There is a process that has been working really well for us. Usually, my brother will start everything off with a riff. He will have an idea, just an idea or a sound or a sonic little noodling.

Ryan Patrick: We call it a vibe!

Gansfird: It does involve a lot of noodling (laughs).

Adrian Patrick: It will usually start there, and then we will put together a loose structure, with all of us contributing to that. Then once we have of an idea, “this sounds like a verse, this sounds like a chorus, this could be a bridge,” I usually start coming up with melodies and fill in the lyrics. But the great part is all the guys are very adept at pointing us in the right direction. I am the only uneducated musician in the whole group. These guys have years of theory and music education, and they are really good about knowing the basic math and science behind it. They say, “You know this will work. This progression into this next change will work.” I’m probably the least focused of everybody in the room, so it helps to have other professionals.

Proft: Is there any conflict in writing styles?

Proft: Can you tell me about the inspiration for your single, “Soldiers?”

Adrian Patrick: I could tell you a lot about it actually. It was written to inspire us to keep going. We were really considering quitting at one point. My brother and I were talking: “Dude, were just spinning our wheels,” and we didn’t know why. We’d done everything we could possibly do in this city and even in LA to a certain extent. Nothing was really happening for us at the national level.

One day in rehearsal, after my brother had had a riff for years and years and years that we never did anything with, he kind of started noodling on it. I was looking around at the guys and thinking of all the sacrifices that we made, the time, energy, relationships, jobs and sometimes even friends we sacrificed to keep making music. I started thinking, “What about these guys who are even younger than me, coming back from Afghanistan and Iraq who sacrificed limbs and lives? I was like, if they can keep going, if they can soldier on, then so can we, and that’s how the song came about. It was ironic that it would be the tune to break us out!

(This single helped get them discovered and signed with Century Media Records with acclaimed producer Jay Baumgardner who has produced Godsmack, Bush, Sevendust, P.O.D, Papa Roach and Seether.)

Proft: How difficult is to be on the road on tour, away from your family and friends?

Adrian Patrick: That’s probably the hardest part. We are here tonight, and we got to spend one night in our beds last night. I watched movies with my mom on Valentine’s day. Corky’s got a beautiful family here at home, Andy’s got his family here, V’s dad is here, and my brother and I have a lot of family here!

Proft: Are they supportive of your music?

Adrian Patrick: Oh yeah, we are very lucky in that respect. They will all be here tonight (for the show at The Joint at Hard Rock). That’s why our guest list is astronomical (laughs).

Proft: What words of wisdom would you share with aspiring musicians?

Adrian Patrick: We have a little saying, and we’ve taken the advice that has been given to us from many bigger-name artists, and that is “Don’t quit.” If you quit, you will never know. We took that and added our own addendum to it: “Don’t quit, and don’t suck.”

A lot of times when a band is starting off, and I’ve done it myself, you think you are better than you really are, and you’re not. You suck. So just don’t suck.

Ryan Patrick: I say, relinquish the ego, and focus on the craft because that’s what we have to do still to this day and continue to do. The guys at the top, and these guys right here with us in the dressing room, they notice the humility, and that goes much farther than thinking you have to have an ego. To be an aspiring musician, you can’t be a cocky bastard.

Proft: Okay, this last question is a little off the wall. In your opinion, what is the meaning of life?

Adrian Patrick: Right? Oh wow, man. I guess if we knew the answer to that, we’d be headlining tonight, right? I don’t know, I’m actually trying to figure that out. I don’t think any of us have an answer for that.

Ryan Patrick: We do have a creed we go by, and its LBM, Life By Music. That’s really the only answer that gives us any kind of solace in life and motivation and strength. It’s what we’re doing. We’re dedicating ourselves to this philosophy, living your life by music. Life is music!

Proft: Anything else you guys want to add?

Gansfird: Tell her about our new single!

Adrian Patrick: Oh yeah! Our new single “I Don’t Apologize” is out, and its currently No. 16 on the billboard rock charts, it just went from 17 to 16, and it looks like it’s going to keep going up!

Proft: Do you have a video out yet?

Adrian Patrick: Yeah, there is a very cool video out directed by Robert John Clyde, and it’s bad ass!

Ryan Patrick: It’s being put in Marriott and Hilton hotels, Disneyland, Macy’s stores across the country and in Buffalo Wild Wings, as part of their rotations, as well as in Hard Rock Cafes around the world.

(“True Love Never Dies” featuring “Soldiers” and “I Don’t Apologize” is out on iTunes. Otherwise is currently on tour across the nation. For show dates, visit the Otherwise FaceBook page.)