My Son The Bum – Flipside of a Fairytale 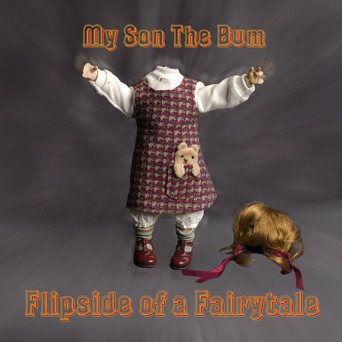 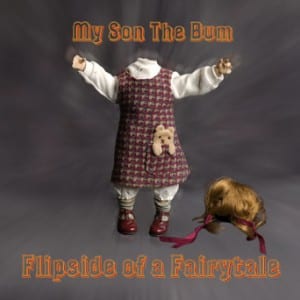 ‘My Son the Bum’ is no ordinary rock band from Long Island, NY. They seem to be an amalgamation of some seriously talented studio musicians who have gotten together via long-distance collaboration, and have put together some really interesting and rockin’ tunes on this, their latest release, “Flipside of a Fairytale”. I am immediately intrigued by the genuinely unique style of music, from the vocals to the excellent musicianship, production and engineering of this album.

For four guys who have never played a gig together, and two of the musicians on this album still have yet to meet face to face, this is as tight and musically interesting an effort as I’ve heard in a long time. Their music is reminiscent of something of a nihilistic cross between, Frank Zappa, Primus, and Faith No More. The music has a fun, tongue-in-cheek quality to it, but is so polished and well produced; you’d think that Bob Rock had a hand in it somehow. This the kind of music that one definitely has to have an open mind to expose them to in order to appreciate all the styles and genres incorporated into the mix.

The music is definitely high-energy, and the arrangements are intricate without getting pretentious or too muddled in the process. It is firmly rooted in rock and roll, but there are some less-than-subtle jazz and funk influences throughout the album.  Lots of interesting key changes, as well as tempo changes – lots of cool stuff to keep the mind happily busy while listening to songs like ‘Caffeine Blues’. Then they completely switch gears with something as weird and quirky as ‘Wig City’, a funny little ditty about hair, with an Elvis flair. Strange, but it makes you laugh and smile all the while. An ‘impossible range of hair delights’, as the song ‘Wig City’ says… “What’s your appetite?” Whatever you’re hungry for, these guys certainly can cook it up, musically speaking!

This latest release by My Son the Bum is almost schizophrenic in how it incorporates so many different styles, moods, and sounds, but it works for these guys in a way that is almost indescribable. With the vocal gymnastics of singer, Ronnie Dee, it brings to my mind the inimitable Mike Patton of Faith No More. The eclectic arrangements on this album bring to mind Frank Zappa on the legendary Apostrophe album. Not just bringing crazy lyrics, but difficult arrangements to the music and having it all make sense to the listener is a huge task to assign one’s self, but to actually make it work is genius. The manic sound of “CEREBRUM’ is a perfect example of this. It’s all chaos and dissonance one minute, and then it just falls into place as it was meant to.

“Candle Towards the Door” has a very otherworldly sound to it – part 1950’s science fiction soundtrack, part Queens of the Stone Age… You’ll have to listen to it yourself to try to describe it further. I dig it!

“Money is the Whip” is one of the two most commercially-viable (meaning should get radio play) tracks on this album, but still shows the Zappa influences through and through. The guitar harmonies are excellent, very tasty, and play for the song. The drums sound fantastic, with a good funky shuffle in the guitar lead section that gets your foot tapping and your head bobbing. The vocals are very funky and soulful on this track, which is my favorite on the album.

The next commercially-viable track is “On Top of Being Down”. This one is for driving fast with the top down and the radio cranked to eleven. A good, rollicking beat, with a nice straight forward hook that makes you wanna bang your head and learn the lyrics quickly so you can sing along. The guitar hook is infectious, and moves your body.  The ending is a surprise; it just cuts off abruptly. I like it. Keeps you on your toes!

“Vicious Vicarious” carries the funky hard rock along for the ride with the killer vocals, intricate drums, and the tight bass lines that all flow together nicely. I am struck by the overall high quality of writing and performance on the entire album. I just wish we could get these guys all in the same room together for once to see what they can do together in a live performance. That is a show I’d pay real money to go and see. I like this band, and I think this is one of my new favorite bands and albums. I hope you will check them out on the web at MySonTheBum.com. Maybe one of these days, they’ll get themselves out on the road and give us the show I am sure they’re capable of bringing, and a show their fans deserve to see!