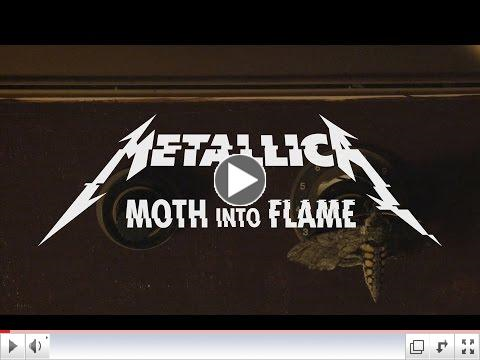 SAN FRANCISCO – September 26, 2016 – Grammy® Award-winning, Rock and Roll Hall of Fame Inductees Metallica have revealed “Moth Into Flame”, the second track from their forthcoming album Hardwired…to Self-Destruct, scheduled to be release on the band’s Blackened Recordings on November 18th. The band world premiered the song on The Howard Stern Show this morning on SiriusXM and shortly after debuted the video for the song, which was directed by Tom Kirk. Hardwired…To Self-Destruct was produced by Greg Fidelman and is available for pre-order in a variety of configurations HERE.

Following a performance at Global Citizen Festival this past Saturday in Central Park, Metallica announced a special intimate performance tomorrow, September 27th at Webster Hall for their Fifth Member fan club members. All proceeds from the show will be donated to City Harvest.

On Thursday, September 29th the band will perform their current single “Hardwired” on The Tonight Show Starring Jimmy Fallon. Fans can tune in at 11:35/10:35c on NBC (check local listings).
###

ABOUT METALLICA
Metallica formed in 1981 by drummer Lars Ulrich and guitarist and vocalist James Hetfield and has become one of the most influential and commercially successful rock bands in history, having sold 110 million albums worldwide while playing to millions of fans on literally all seven continents. They have scored several multi-platinum albums, including 1991’s Metallica (commonly referred to as The Black Album), with sales of nearly 17 million copies in the United States alone, making it the best-selling album in the history of Soundscan. Metallica has also garnered numerous awards and accolades, including nine Grammy Awards, two American Music Awards, and multiple MTV Video Music Awards, and were inducted into the Rock and Roll Hall of Fame and Museum in 2009. In December 2013, Metallica made history when they performed a rare concert in Antarctica, becoming the first act to ever play all seven continents all within a year, and earning themselves a spot in the Guinness Book of World Records.