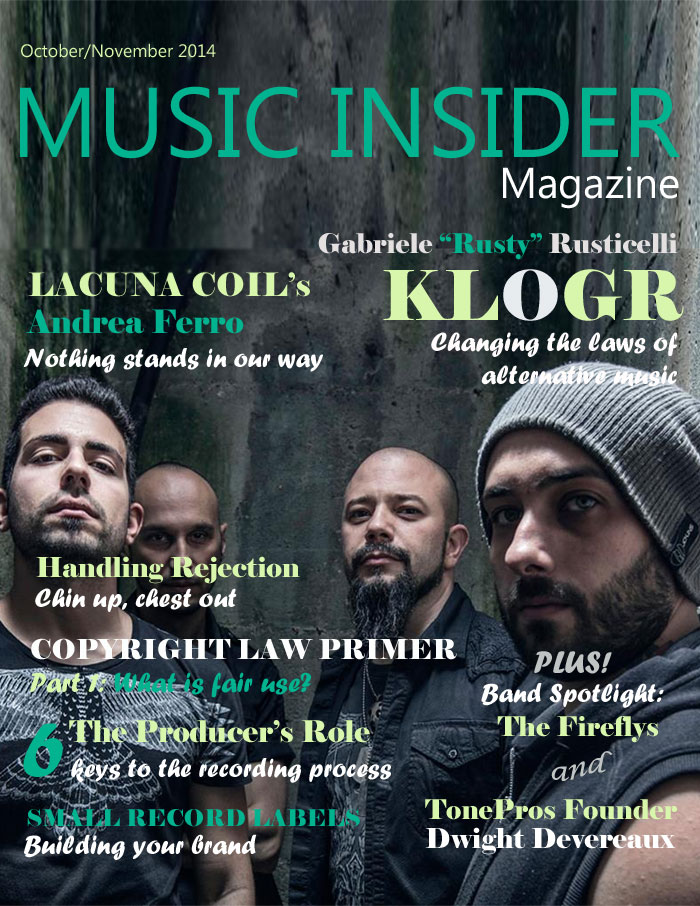 Changing the laws of alternative music

The conception of the Italian alternative rock/metal band KLOGR (pronounced kay – log – are) began when vocalist Gabrielle (Rusty) Rusticelli and guitarist Nicola Briganti, were in Los Angeles to attend the National Association of Music Merchants (NAMM) show. There, they tossed around the idea to start a new project, and when they returned to Italy, they started to collaborate and began writing music together.

At that time, former bass player from San Diego Todd Allen and drummer Filippo De Pietri joined the band, and KLOGR released its first album “Till You Decay” in January 2012.

Recently, I asked Rusticelli about his experience during the release of their first album. He described it as being very intense, since he was the producer of the album. After weeks and weeks of songwriting, he recorded and mixed the full album, produced his guitars and vocals and at the end, was exhausted.

He says, “When you produce your own music, it is easy to lose direction. I’m very satisfied with the result, but for the next album, ‘Black Snow,’ I preferred to stay focused on the guitar and vocal parts, and leave the production to the producer.”

When I asked how Rusticelli and the band came up with the unique name of KLOGR, I found out it’s more technical than I thought!

Rusticelli said the band’s name is a reference to the law of Weber-Fechner developed in the second half of the 800s, known as the fundamental psycho-physical relationship (S = K log R).

“I love this formula,” says Rusticelli, “because its meaning explains that we are not really free. We are under control of what is around us; everything that surrounds us conditions us.”

He says KLOGR doesn’t have a specific message, “yet we try to sensitize the public on topics such as our control, such as the creation of false needs, the importance of preserving the environment in which we live.”

The band members play various roles when writing their music. Rusticelli explains that everyone contributes to the creative process while jamming together, and the ideas just come, and then he writes the lyrics.

Lyrics aside, Rusticelli believes not only is the music different in Europe as compared to the U.S., but the market in America is larger.

“This allows many music products to get space and feedback. At the same time, I believe that many of the innovations come from cities like London and Berlin. When you have a way to experiment and test your music on a large public, you certainly have more chances to communicate quickly. The history and culture has a great influence on various aspects of music …. but nowadays, thanks to the network, these distances are shorter.”

If Rusticelli could change anything about the music industry, he’s uncertain of what he would alter in such a complex industry. “The music industry is really a jungle. It’s not easy to sell your music in a legal way, and this is dangerous, because without a budget, it is difficult to make a production and to promote it.”

One of his biggest dreams is to produce an album with Michael “Elvis” Baskette or to play a song with A Perfect Circle. When asked who his biggest supporter is, Rusticelli proudly states, “All our Italian staff. We have great management, a press office and an awesome fan club that works everyday on social media and our network to spread the music. We also have a lot of fans all around the world.”

Rusticelli humbly says they are not stars yet, but many people love their music, and he hopes KLOGR’s fanbase will continue to grow.

The biggest setback the band ever experienced? “We live in a world and a time where you need big budgets to achieve greater visibility,” says Rusticelli. “We are an independent band, and we do everything with our own strength. Instead of funding new music, major labels tend to charge to publish a disc. The Internet is a wonderful tool, but there is no filter, so it’s not so easy to reach people. Our biggest accomplishment is that we recorded two CDs and an EP with this band.”

Rusticelli says he’s played in many places in the world and still wants to do it. “I feel fortunate.”

When asked about KLOGR’s future plans, Rusticelli informed me of the recent lineup change and says after three years of working on a “project,” KLOGR can now call themselves a band.

“The two new members (Pietro Quilichini on guitar and Rob Iaculli on drums) are really what we needed. We’re recording an EP, which we will release along with a DVD documentary of what happened from the beginning to the present. In the future, I see live shows, new album, live shows, touring.”

KLOGR also plans to head back to the U.S. then tour Canada.

Says Rusticelli, “I would really like it very much! I have never been there!”

And to all those aspiring musicians out there … Rusticelli has this advice:

“Remember that the exercise leads to perfection. Perfection makes music safe. But to communicate, first you have to be yourself, play if you have the need to share what you are doing … not to aspire to success. Of course, success is a cool thing, but if you are not real, it will last less than the time that took you to get there.”