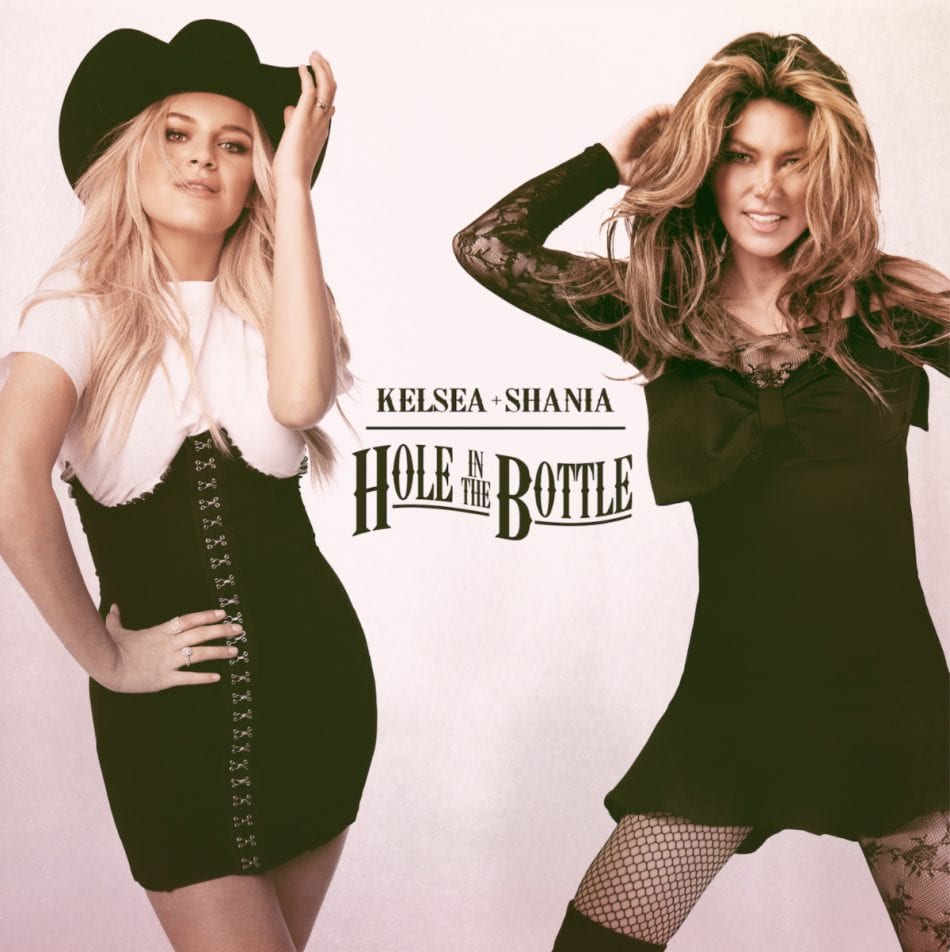 DEBUTS “hole in the bottle” (WITH SHANIA TWAIN)

Said Kelsea Ballerini, “They say don’t meet your heroes…unless your hero is Shania Twain…then meet her, know her, and make music with her. She’s inspired me in every way and has become a mentor and friend and added some major sass and spice to hole in the bottle the way only Shania could.”

Said Shania Twain, “Kelsea and I have had some fun laughs together over the last couple of years! She joined me on stage back in 2017 when I headlined Stagecoach and we’ve had a chance to catch up over a glass of wine a couple of times since. We’ve also sent pieces of songs back and forth to each other and I have to say, she’s an incredible raw talent. I love ‘hole in the bottle,’ it really speaks to my own sense of humor and it was so cool to get to do it with a friend.”

The whimsical and lyrically playful “hole in the bottle” is the third single off of Ballerini’s 2020 studio album kelsea (Black River Entertainment) and is currently climbing Country radio charts at #13 on Mediabase and #15 on Billboard. It is accompanied by a stylistic video filled with bright colors and roaring 20’s inspired black-and-white scenes, directed by Hannah Lux Davis.

Kelsea Ballerini has consistently made history. With the release of her debut album she became the only female country artist to hit #1 with her first three consecutive singles from a debut album, attaining her fifth #1 in four years with the newly certified double platinum “Miss Me More.” Her critically acclaimed sophomore album Unapologetically marked her second Top 5 debut on the Billboard Top 200. Her debut and sophomore albums have both been certified gold, and she has a career total of nine gold and platinum singles certifications and total streams exceeding 2 billion to date. Ballerini has garnered two GRAMMY® Award nominations, won two ACM Awards, took home the iHeartRadio Music Awards honor for “Best New Artist” and received multiple career nominations from the ACM Awards, American Music Awards, CMA Awards, CMT Awards and People’s Choice Award. The artist’s most recent 2020 studio albums kelsea and ballerini were met with critical praise including by NPR who said, “Kelsea Ballerini is definitely one of the most influential women in country right now… she’s defining the sound of the genre.” She has also been welcomed as the Grand Ole Opry’s youngest current member.

In addition to her artist projects, Kelsea launched her first ever radio show with Apple Music “kelsea radio”. On “kelsea radio”, an up-close-and-personal conversation between Ballerini and her fans, she opens up about the creative processes and personal experiences that have shaped her career.

International superstar Shania Twain is a five-time GRAMMY winner and one of music’s most renowned trailblazers. With five albums released and more than 100 million albums sold worldwide, Twain remains the top-selling female country pop artist of all time. Her hits include “Any Man of Mine,” “That Don’t Impress Me Much,” “You’re Still the One” and “Man! I Feel Like A Woman!” Twain’s first album in 15 years, NOW, was released in September 2017 and debuted at No. 1 on the Billboard Top 200 albums, making it the first female country release in over 3 years to top the all-genre chart. Additionally, the album landed at No. 1 on the Billboard Top Country album charts and went to No. 1 in Canada, Australia and the UK. The release of the album was followed by a year-long sold-out NOW World Tour, and her return to the live stage was nothing short of spectacular. Twain has made a substantial impact not only on the stage but also on-screen. A six-part documentary on her life called Why Not? With Shania Twain premiered on the Oprah Winfrey Network in 2011. In 2017, she made a cameo in Broad City’s fourth season, which was later nominated for a Writer’s Guild of America Award for Best Comedy Series. In the same year, Twain appeared on NBC’s The Voice, mentoring contestants alongside Gwen Stefani, as well as on CTV’s music competition series The Launch. She also performed on Dancing with the Stars and America’s Got Talent. She made her movie debut in 2019 alongside John Travolta and Michael Madsen in the high-octane drama, Trading Paint, and can also be seen in Lionsgate’s I Still Believe, released on March 13, 2020. Prior to the global shut down, Twain was performing at her second residency in Vegas called “Let’s Go!”. The two-year residency at the Zappos Theater at Planet Hollywood Resort & Casino kicked off with a sold-out run. The residency will come back in 2021. On October 2 Shania released The Woman in Me: Diamond Edition, in celebration of the 25th anniversary of her GRAMMY-winning breakthrough album. The Diamond Edition is the first of her diamond certified trilogy of albums and contains a newly remastered version of the genre-busting, multi-platinum album as well as unreleased tracks and live recordings.