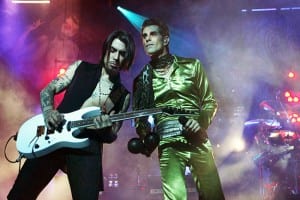 There’s no doubt that Jane’s Addiction star has risen in the city of Hollywood, and for the second time in as many years the band will receive an honor in the city.

The group, who were honored in June 2011 with induction into Hollywood’s Rock Walk for musicians, will now receive a star on the Hollywood Walk of Fame. Organizers have revealed the next batch of celebrities to receive honors during the calendar year of 2013.

In a statement posted on their Twitter account, the band stated, “We’re incredibly honored to receive a Star on the Walk of Fame! Stay tuned for more exciting news.” At present, the exact date of their star ceremony has not been revealed.

Jane’s Addiction will continue their ‘Theatre of the Escapists‘ tour Aug. 6 in Cleveland with dates booked into early September.