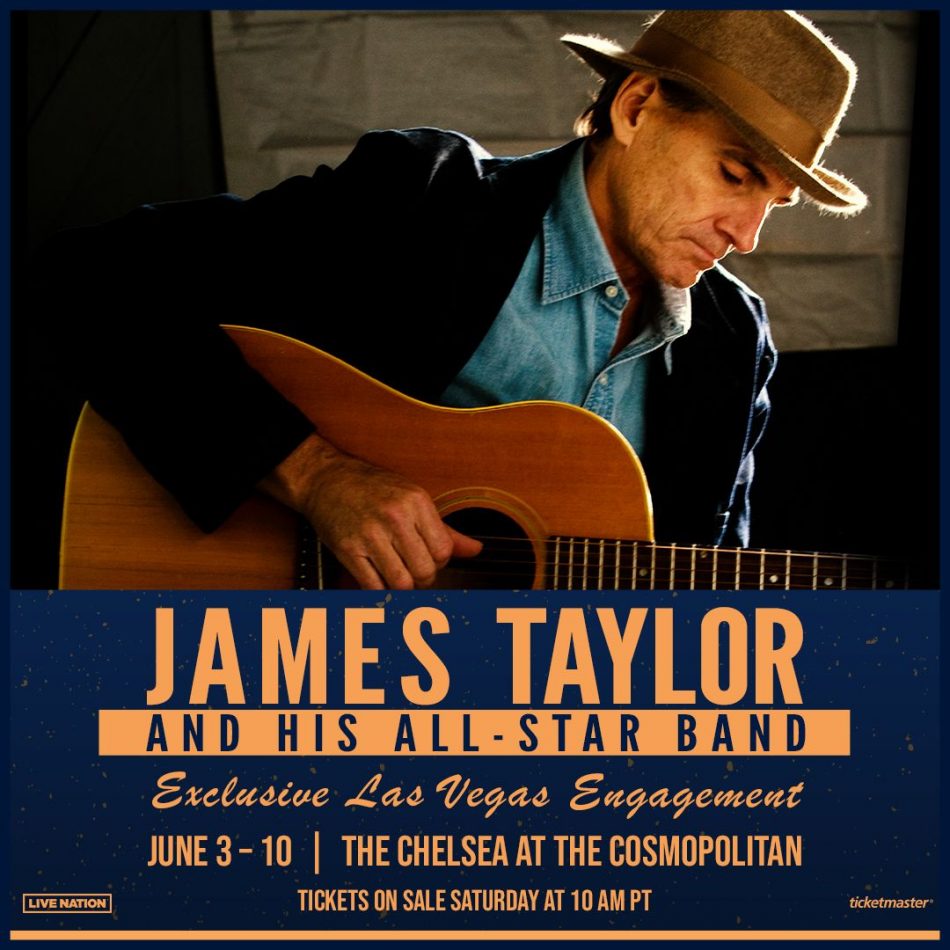 James Taylor and His All-Star Band are coming to Las Vegas for a five-night, exclusive engagement at The Chelsea inside The Cosmopolitan of Las Vegas. The shows will be held June 3, 4, 7, 9 and 10, 2023.

There will be a fan presale beginning Wednesday, Jan. 25 at 10 a.m. PT. Citi is the official card of James Taylor and His All-Star Band’s exclusive Las Vegas engagement. Citi cardmembers will have access to presale tickets beginning Wednesday, Jan. 25 at 10 a.m. PT through Friday, Jan. 27 at 10 p.m. PT through the Citi Entertainment program. For complete presale details visit www.citientertainment.com.

As a recording and touring artist, James Taylor has touched people with his warm baritone voice and distinctive style of guitar-playing for more than 50 years, while setting a precedent to which countless young musicians have aspired. Over the course of his celebrated songwriting and performing career, Taylor has sold more than 100 million albums, earning gold, platinum and multi-platinum awards since the release of his self-titled debut album in 1968. In 2015, Taylor released Before This World, the first-ever #1 album of his illustrious career. Taylor has won multiple GRAMMY Awards, has been inducted into both the Rock and Roll and the prestigious Songwriters Halls of Fame and in February 2006, The National Academy of Recording Arts and Sciences selected him its MUSICARES Person of the Year. Taylor was also awarded the distinguished Chevalier of the Order of Arts and Letters by the French government and the National Medal of Arts by President Barack Obama in 2012. In November of 2015, Taylor was presented with the Presidential Medal of Freedom, the Nation’s highest civilian honor and in December of 2016 he received the Kennedy Center Honors, which are presented annually to individuals who have enriched American culture by distinguished achievement in the performing arts. In early 2020 Taylor released Break Shot, a deeply personal and authentic audio-only memoir detailing his first 21 years. He also released his newest album, American Standard, his 19th studio album, which earned Taylor the 2021 GRAMMY Award for Best Traditional Pop Vocal Album and gave him the honor of being the first artist to have a Billboard Top 10 album in each of the past six decades.

Taylor, his wife Kim and their sons Rufus and Henry reside in Western Massachusetts.

About The Cosmopolitan of Las Vegas

The Cosmopolitan of Las Vegas is a unique luxury resort and casino that offers a decidedly different perspective. Located in the heart of the Las Vegas Strip, The Cosmopolitan’s distinct vertical multi-tower design features more than 3,000 guestrooms with residential living spaces, private terraces and breathtaking views of the city skyline. Luxury amenities include a premier lineup of world-class culinary experiences; an intriguing mix of bars, nightclubs and entertainment venues; 100,000-square-foot-casino; award-winning spa, salon and fitness center; unrivaled pool district and an eclectic line-up of hand-selected boutiques. For more information visit: www.cosmopolitanlasvegas.com and follow us on Instagram, Twitter and Facebook.