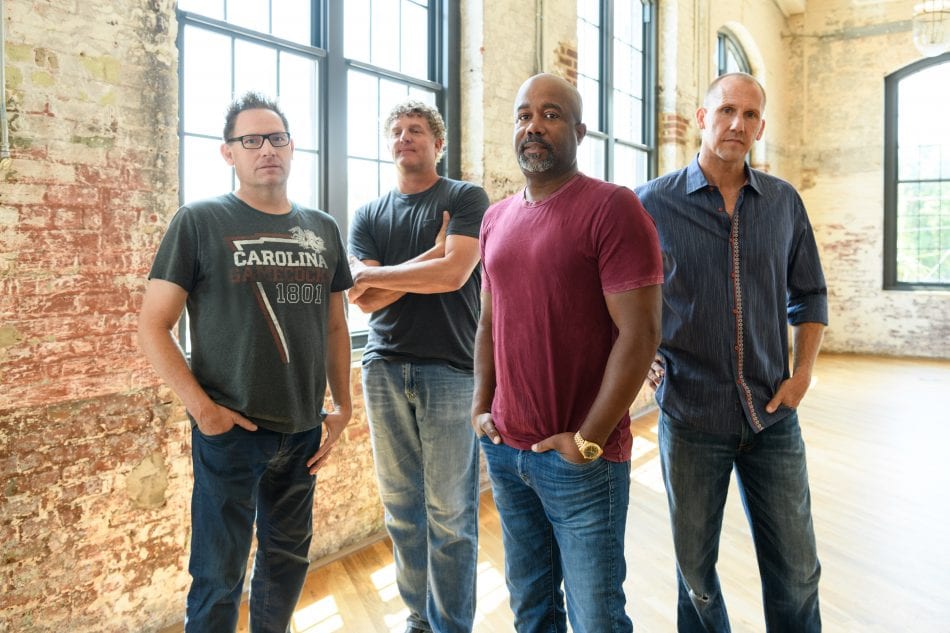 NASHVILLE, Tenn. – One of America’s most beloved bands, GRAMMY-winning Hootie & the Blowfish have announced a new livestream performance together with Sessions, on sale now. The virtual performance will be an online presentation of the tour-closing performance from their hugely successful 2019 Group Therapy Tour, broadcast exclusively via Sessions Live on Friday, April 23 at 8 p.m. CT.

The acclaimed group will perform some of their greatest hits, including “Hold My Hand,” “Only Wanna Be With You,” “Time” and “Let Her Cry”  in never-before-aired footage from their sold-out homecoming stop in Columbia, South Carolina – the band’s first return to playing the city where it all began in almost 20 years. Fans who missed out on attending the live shows, or who want to relive those fun nights they shared together, can tune in to experience this live stream.

“We loved every minute of being back on stage together – especially in Columbia,” shared lead singer Darius Rucker. “We all miss live music right now, so we’re really excited to be able to offer this show to our fans who can now experience the energy of that night from home.”

“We’re thrilled that Hootie & the Blowfish have chosen to make Sessions the home for this very special performance,” said Sessions co-Founder Tim Westergren. “Live streaming continues to integrate ever more closely with physical performances as globally popular artists discover the value of an infinite virtual stage.”

Early-bird GA tickets priced at $15 are on sale now at SessionsLive.com/Hootie/tickets. GA ticket prices will increase to $20 on April 20 at 8 p.m. CT. VIP ticket packages priced at $250 are also available, which include access to the live stream as well as an autographed tour pass and access to an exclusive virtual afterparty Q&A session with the band.

Formed at the University of South Carolina in 1986 in Columbia, the band broke through with their Billboard chart-topping 1994 debut Cracked Rear View, which has been certified Diamond and remains among the top 10 best-selling studio albums of all time. The band’s blend of rock, blues, soul, and pop music endeared them to fans worldwide, helping them sell more than 25 million records to date. In addition to the sold-out Group Therapy Tour, the band also released new album Imperfect Circle in late 2019 under a new record deal with Universal Music Group’s Capitol Nashville.

About Hootie & the Blowfish
With the rich, bluesy vocals of Darius Rucker and gleeful harmonies of guitarist Mark Bryan, bassist Dean Felber and drummer Jim “Soni” Sonefeld, Hootie & the Blowfish have sold over 25 million records worldwide to date after their infectious melodies hit the airwaves in 1994 with hits such as “Hold My Hand,” “Let Her Cry” and “Only Wanna Be With You.”

The quartet met at the University of South Carolina where endless gigs at frat houses and local bars built a major local buzz. Their blend of pop, folk, blues, soul and rock made them hard to pigeonhole, but easily accessible to anyone who loved good music.

The band remained a top draw nationwide and released five more albums for Atlantic: Fairweather Johnson, Musical Chairs, Scattered, Smothered & Covered, Hootie & The Blowfish and The Best of Hootie & The Blowfish, as well as Looking For Lucky on their own Sneaky Long Records and LIVE in Charleston, The Homegrown Concert Event DVD and CD. The band took a break from full-time touring in 2007, reuniting annually for a variety of philanthropic events while also pursuing solo projects. 2019 marked the band’s first full-time touring year in over a decade as they embarked on the sold-out Group Therapy Tour in support of Imperfect Circle, released in late 2019 under a new record deal with Universal Music Group’s Capitol Nashville.

About Sessions
Sessions is co-founded by digital music pioneer and former Pandora founder Tim Westergren and fellow entrepreneur and longtime developer of virtual games Gordon Su. Sessions is the only live streaming solution providing all of the necessary components for musicians to succeed: audience development, fan engagement, and state of the art monetization drawn from the most advanced techniques of virtual gaming. Sessions is creating a space to bring artists and fans together for intimate live experiences 24/7. From pop and hip-hop to country and classical, there’s an artist for every music fan in Sessions. Since the start of 2021, Sessions has expanded the platform’s focus from just musical performances to staging various cultural events including “Alaska’s Drag Queen of the Year 2021 Pageant” this March, Joy Ruckus Club 3, featuring over 180 Asian American artists from around the world making it the largest ever Asian American virtual music festival in the world, plus Valentine’s Eve with GRAMMY Winner CeeLo Green.