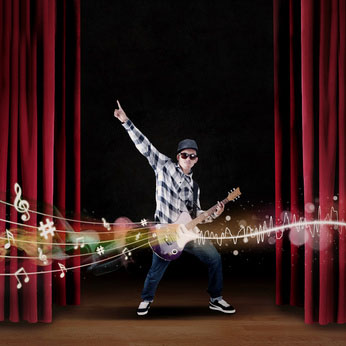 17 ways to be victorious
by Gene Baker

At some point in your musical career, you will likely enter a Battle of the Bands contest. For many of us, this starts at a young age, as we escape the garage and start playing real gigs. For others, it’s a good way to launch a new band.

Regardless of your age, you can test the waters, see the audience’s response and get a feel for how the band works together. Battles can be a popularity contest, depending on how the voting/judging is managed, but typically, the cream rises to the top, and the best band triumphantly wins. Plus, some of the larger battles launch bands and get them tours, gear sponsors and record labels.

During October, my sound company was hired for a local Oktoberfest Battle of the Bands, which hosted seven bands that paid to enter, and the winner took home the entire pot. Each band was allowed 20 minutes to play and 15 minutes between sets to get on/off the stage. To keep it simple, my company provided a back-line bass rig, drum kit and guitar cabs, so all we had to do was focus on changing guitar rigs and shuffling gear around on stage.

The day had a strict timeline, so all things considered remained fair, as every band was given the same amount of time to handle its business. I reached out to all bands well in advance to supply a stage plot that listed their preferred gear locations and any microphones needed for vocalists, keyboards, horns or acoustic direct inputs. Many young bands do not even know what a stage plot is, so I included a detailed list of what we would or would not provide and educated bands to come in prepared, pre-staged for load in, pre-tuned etc. So, in a perfect world, all we would need is a sound check and smooth changeovers to stay on time.

Granted, 15 minutes to get a band on and off the stage isn’t a lot of time, and the band’s size and amount of gear can quickly be a game changer. Some bands were very prepared. Those that set up in less than 15 minutes were allowed to extend their set by additional time. Others that took too long to set up had their set reduced. One band only got to play two songs; some bands played as many as six tunes.

When you enter one of these contests, the time slot you get is not super important, but usually, no band wants to play first. You won’t have the maximum audience, but you will get the longest sound check. Having a good sound check can make a big difference in what everyone hears — from the audience to the players on stage.

At this particular event, all bands drew straws and were allowed to volunteer for the first slot, but not one stepped up. If you’re a complicated gear band, taking this first position could help you deliver your best sound. Also the size of your gear means nothing and often creates problems if it’s too large or you’re too loud. An interesting fact from this particular battle: The band that won played through very small combo amps of 30 watts or less and played the longest due to a very fast setup time.

17 ways to be victorious in battle

Here are some helpful tips on how you can prepare for combat and defeat your opponents.

This community event showcased a healthy assortment of local talent of all ages, from teens to musicians in their mid-40s. The music included a variety of styles, from gospel, metal, pop and classic rock, to shades of early Rolling Stones and Police. Most bands performed original music, which was a breath of fresh air, and the younger bands really seemed to give live music a strong sign of hope for our future generations.

There’s a lot of talent out there, and these bands are listening to those who helped pave the way. Support your local music always.