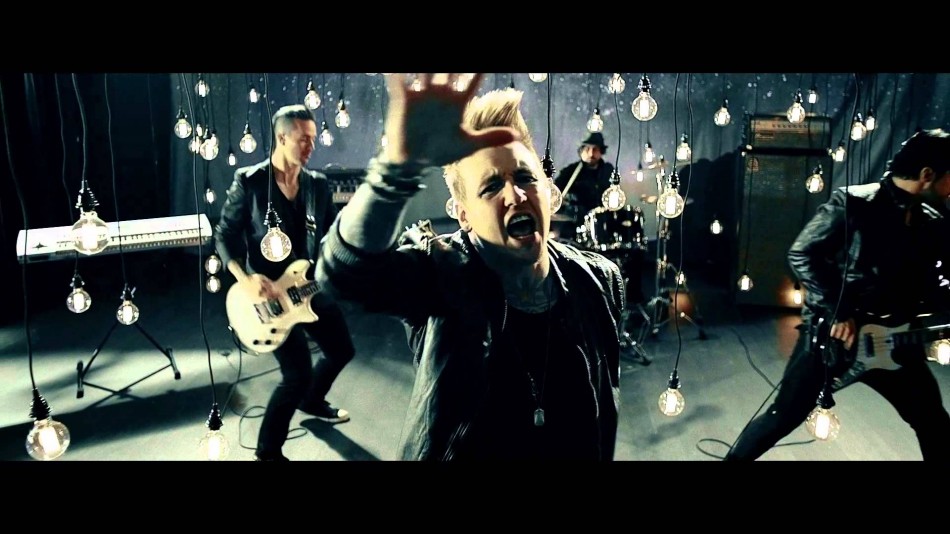 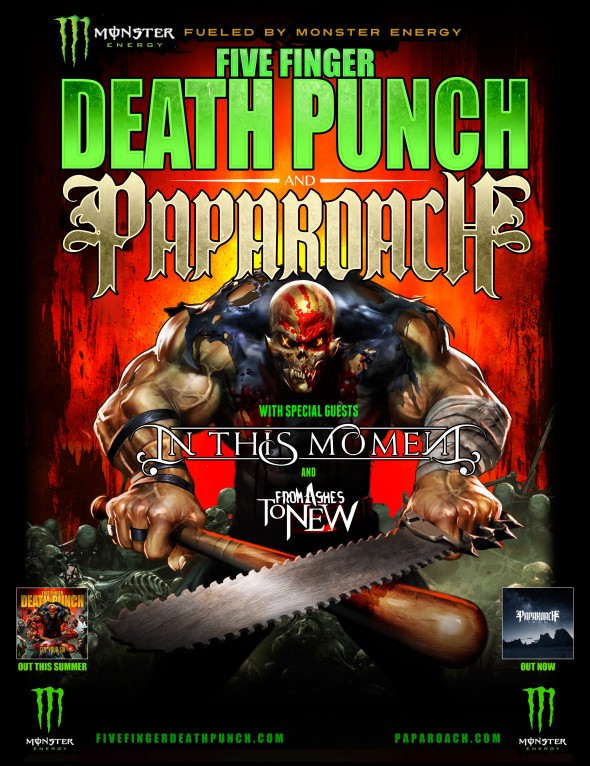 With 10 #1 singles and over 25 Top 10 singles between them, millions of video streams and fans all over the globe FIVE FINGER DEATH PUNCH and PAPA ROACH have been dominating the airwaves throughout their careers. The two bands – who have also been heralded by fans and press alike as having killer live shows – have come together for the first time to co-headline North America arenas this fall, fueled by Monster Energy and produced by Frank Productions/NS2.

Larry Frank, CEO of Frank Productions/NS2 notes: “Five Finger Death Punch and Papa Roach are the two most dynamic live rock bands touring today. We can’t wait to blow away fans across the U.S. with a show this huge.”

In an innovative move, FIVE FINGER DEATH PUNCH and PAPA ROACH actively involved the fans by giving them the opportunity to request the tour come to their city via a “demand campaign” housed at http://demand.fivefingerdeathpunch.com/ and http://demand.paparoach.com/  An overwhelming 1.5 million people responded to the call to action and made their voices heard.

Says Zoltan Bathory (guitar) of Five Finger Death Punch: “This tour is shaping up to be the perfect storm. We are really good friends with Papa Roach so for years we’ve been talking about touring together and it’s finally coming together in a big way. Both 5fdp and Papa Roach are bands of the people – our fans are who propelled us to success. So what better way than to give the fans ownership in the tour? In the world of Wikipedia and Kickstarter where crowd funding and crowd sourcing has become the standard of community effort and the new way of making things happen this might quite possibly be the future of touring – you simply ask the fans where they want you to go”.  “We are super excited to be sharing the stage on this co-headliner with FFDP,” says PAPA ROACH vocalist, Jacoby Shaddix. “This will give Papa Roach the chance to put on the best, most epic live show to date. Our fans are going to be so stoked for these shows coming up. We seriously can’t wait to get out on the road for this tour.”

Special guests will be IN THIS MOMENT with support from debut artist FROM ASHES TO NEW. Fans will get to see four of Rock’s most exciting, relevant bands under one roof on one night for $40 – a nice price for a package sure to excite fans who voted to bring the tour to their town.

Coinciding with the tour announcement today, the bands also launched a special video about the tour which contains a pre-view to the first new single, “Jekyll and Hyde,” from FIVE FINGER DEATH PUNCH’s much-anticipated forthcoming sixth full-length studio album, Got Your Six, to be released globally on August 28, 2015. Watch the video teaser here: http://on.fb.me/1B90jZR

PAPA ROACH released their 8th studio album F.E.A.R. which features the #1 single, “Face Everything And Rise”, “Warriors” and “Gravity,” the 2nd single which will be released on June 1, 2015. Watch it here: https://youtu.be/tIgtaM7OV4g .“Papa Roach’s Jacoby Shaddix is the human equivalent of an energy drink.  He is a firecracker who also happens to be keenly self-aware, candid to a near-fault … but he hasn’t lost any of the spark that helped propel Papa Roach to multi-platinum status…” says Alternative Press. 2015 marks the 15th Anniversary of INFEST, the band’s breakthrough album, which has sold over 8 million albums to date.

Joining FIVE FINGER DEATH PUNCH and PAPA ROACH on the biggest rock tour of the Fall are Special Guest and fan favorites IN THIS MOMENT. Maria Brink (vocals) and Chris Howorth (guitars) of IN THIS MOMENT noted: “We are beyond excited to tour North America with our good friends Five Finger Death Punch  and Papa Roach! Our bands have known each other for a long time and have done various shows and tours together over the years, but we’ve never combined forces like this. It’s big and it’s beautiful, faces will be melted, souls will be crushed–this is definitely a tour not to be missed!”  Watch the video for “Sex Metal Barbie” from their current album, Black Widow, here: http://bit.ly/1dgcUoJ

The tour line up is rounded out by one of Rock’s newest standouts, FROM ASHES TO NEW. Vocalist Matt Brandyberry says: “We are beyond ecstatic to be a part of such an amazing lineup. This honestly, is a dream come true for us to be playing with such inspirational artists. We can’t thank everyone enough for believing in us as musicians and giving us the chance to show the world what we are made of!” From Ashes To New’s fan-generated lyric video for “Downfall” debuts today onhttp://www.altpress.com

FIVE FINGER DEATH PUNCH headlined North American arenas to great success last fall. Their previous albums THE WRONG SIDE OF HEAVEN AND THE RIGHTEOUS SIDE OF HELL, VOLUME 1 and VOLUME 2 both debuted on the U.S. Billboard album chart at #2 within a four-month period in 2013, as well as in the top ten mainstream charts all around the world. Volume 1 has since gone gold in the U.S. and Canada, and between them, the two albums feature three #1 radio hit singles – “Lift Me Up” featuring Rob Halford of Judas Priest, “Battle Born” and “WrongSide Of Heaven”, the video to which has over 26 million views to date.

About Monster Energy:
Most companies spend their money on ad agencies, TV commercials, radio spots and billboards to tell you how good their products are. At Monster Energy, we chose none of the above. Instead we support the scene, our bands, our athletes and our fans. We back athletes so they can make a career out of their passion. We promote concert tours, so our favorite bands can visit your hometown. We celebrate with our fans and riders by throwing parties and making the coolest events we can think of a reality. www.monsterenergy.com  | www.facebook.com/monsterenergy