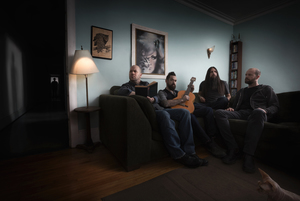 FINGER ELEVEN RETURNS WITH FIRST ALBUM IN FIVE YEARS,
‘FIVE CROOKED LINES,’ DUE OUT JULY 31
VIA THE BICYCLE MUSIC COMPANY/CONCORD

JUNE 9, 2015 – Ontario, Canada – FINGER ELEVEN is set to release their sixth studio album, and first in five years, appropriately titled FIVE CROOKED LINES, on July 31, 2015 via The Bicycle Music Company/Concord. The album’s first single, “Wolves and Doors,” is available on digital online retail outlets today and hits radio this week. A video for the song premieres today on VEVO, watch it here:

When FINGER ELEVEN– Scott Anderson (vocals), James Black (guitar), Rick Jackett (guitar) and Sean Anderson (bass)–decided to start writing the follow-up to their 2010 album LIFE TURNS ELECTRIC, the band members all agreed they wanted to do something different. Since their formation in high school in 1990 (as Rainbow Butt Monkeys), they had released seven full-length albums – including the 2007 Juno Award winning THEM VS. YOU VS. ME, which featured the smash hit single “Paralyzer” — and experimented with a variety of styles such as hard rock, classic rock, heavy blues and textural pop. So, over a two-and-a-half year period, they decided to try a bit of everything over a multitude of writing sessions.

As the members pored through the material they had written, they agreed that the best songs, the ones that rang truest and were the most natural, were the more aggressive ones. So, instead of spit-polishing the mixes and layering the tunes with heart-rending guitar arpeggios and keys, they toughened up, building muscular walls of riffs and performing with a forcefulness and energy reminiscent of their earliest days.

“When we started the band, we just wanted to blow everyone away with force and power and MAKE them take notice of us,” says guitarist James Black. “We wanted this record to be that same kind of punch in the face. On our past couple albums, we’ve taken full advantage of the ‘studio.’ We’ve had songs with hundreds of tracks, some with forty tracks of guitar alone. This time, we wanted to keep the songs so raw they sounded like they do in the rehearsal room.”

In addition to capturing a primal, authentic feel, FIVE CROOKED LINES incorporates the band’s earliest influences and recontextualizes them in an explosive modern framework. “Absolute Truth” features a turbulent rhythm that tumbles through a vortex of quasi-psychedelic guitars, “Blackout Song” is a feast of fuzzy, wailing riffs, four-to-the-floor beats and euphoric hooks and the title track exits the gate with crashing symbols, a buzzing passage and a counter-melody that keeps the music pumping. From one song to the next, there are no compromises, no concessions and nothing tailor-crafted to suit any outside demands. There’s even a seven-minute song, “Come On, Oblivion,” a transcendent ebb-and-flow mélange of trippy acoustic and electric instrumentation that’s as reminiscent of early The Verve as it is of Pink Floyd.

The band chose the album title after they realized that Anderson’s lyrics to the title song had a universal appeal and a particular relevance to the album. “For me it’s symbolic of fortune and luck and how fragile those things are,” Anderson says. “In one instance you’ve got five crooked lines, which in one position is just a heap of bent sticks. But in the right way, they make a star, which is the most glorious shape there is.”

When all the songs were ready, FINGER ELEVEN headed down to a home studio in West Nashville where producer Dave Cobb (Rival Sons, Sturgill Simpson, Jason Isbell) helped them narrow the bounty of songs they had written down to 12 and record them at break neck speed. Upon arriving in Music City, FINGER ELEVEN knew they needed their record to capture the old-school atmospheres of some of their favorite classic rock records. Secondly, they needed a drummer.

“Instead of finding someone to come down to Nashville with us, we figured we could get a killer drummer there,” explains Jackett. “I mean, Nashville is home to some of the best session players. Dave called up Chris Powell, and within the first three hours of the first day it was happening. We knew right away that his drumming would elevate the entire record.”

Some critics and fans frown when musicians tap into a particular era for inspiration, but, having achieved success on their own terms long ago, FINGER ELEVEN don’t care. “I think we’ve always gone against the current,” Black says, “or at least against where we’re ‘logically’ expected to go next. Because we’re all open minded enough to just go for it, we go for it. With Five Crooked Lines I think we went far enough out there to be able to look back and say ‘Fuck it.’ We love big guitar, big beat, loud as fuck rock and roll music. We know how to do this kind of music. Let’s own it.”

Before the album’s release, FINGER ELEVEN will hit the road for shows with Three Days Grace, along with headlining and festival shows of their own starting June 13 in Burlington, Ontario, Canada at the Sound of Music Festival.

Check out FINGER ELEVEN at any of the following stops, with more dates to be announced in the coming weeks: