Smartphones are quickly taking over our daily lives and ridding us of extra gadgets. As technology evolves, your guitar rig may be next to become obsolete.

I’m a tube-tone purist by heart but also a gear freak, so I’m probably not too different than you. Walking around the National Association of Music Merchants show in January 2013, it was easy to spot many guitar app companies hitting it hard. I plan to cover a few of my favorites in the next few articles. First, I’d like to focus on JamUp Pro XT (and JamUp XT).

Before we get started, keep in mind that you’ll need an interface no matter which app you choose. I started out with the iRig Stomp, which has a nice stomp pedal format that makes a variety of connections rather easy with this stout format. You can find a variety of comparable devices for as little as $20 to as high as $100. 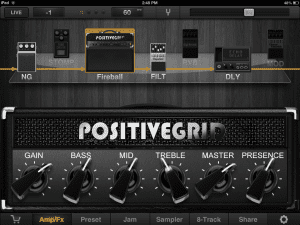 The iRig Stomp features a guitar level knob, which sends your signal into the app, plus headphone/speaker output, 1/4-inch guitar input, 2-1/4-inch stereo outputs to an amp or mixer plus a stomp on/off switch to bypass or mute the app, which is useful if you still need to bypass it like a traditional stomp pedal into an amp. It plugs into your i-device via the headphone jack. A 9-volt battery or power supply is required.

My guitar is loaded with Jason Lollar Imperial Humbucker Pickups, and a setting of 5-6 works well without overloading the input of JamUp Pro XT, which also features a nice volume unit meter so you can monitor how hard you’re hitting the input, which can greatly alter the amount of noise you create. With a variety of apps I sampled, noise seems to be the detail hardest to overcome until you find and tweak the settings to dial it in. All apps feature noise gates to manage noise levels in the audio signal and keep this under control.

I also have a Line 6 Sonic Port iOS audio interface, a very beefy compact unit, that plugs into the multi-pin port of your i-device and requires no power; it also has a TRS 1/4-inch stereo output, 1/8-inch stereo input for keyboards or other and no level control; although, it’s extremely simple, sounds great and has fewer noise adjustments to deal with. The only drawback may be if you need to charge your i-device while using the app. 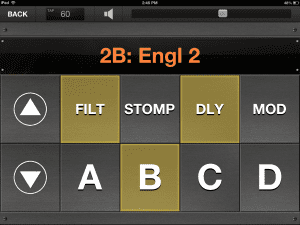 I first started out downloading a host of free apps to see what caught my ear then upgraded from there with those I liked. One detail to clarify right out the gate is the JamUp XT free version is actually the same as JamUp Pro XT, except the free version comes with fewer amps and effects. The Pro version comes with more preinstalled goodies and purchase upgrades are not interchangeable between them. No matter which app you choose, you can still be all in for under $100, which is cheaper than most pedals, and you’ll be loaded with a variety of versatile tools. But you can also pick and choose from bundles of amp/effects from a variety of amp families: acoustic, vintage classic, essentially all Marshall eras, Mesa/Boogie, a rippin’ Engl, Hiwatt, a variety of boutique amps and bass rigs. There’s something for everyone available in bundles or individual add-ons, even a Metal Signature package from Jeff Loomis, Keith Merrow and Ola Englund for some serious shred patches.

An important detail to consider is effects, as some apps only allow you to place effects before the amps input. Placing effects in an effects loop or after the amp in app world, allows you to put effects like delay, reverb, EQ and pitch shifting after the amp, so it sounds right. They serve up about everything you could ask for, even a wah and whammy pedal with the pedal functioning on screen by wiggling your finger. The only pedal I didn’t find was an intelligent harmonizer.

Some hip control features include a virtual pedal board nicely laid out for live-touch screen use. You can bank up/down, plus there are four patches per bank and a row of four stomp buttons to control what you assign them to. For example, on the input, I may have an Ibanez Tube Screamer, an EQ after the amp for a solo boost using level or EQ, then a delay, reverb or chorus assigned to the last two buttons. The buttons are huge on an iPad, so it’s simple to attach to a mike stand and slap buttons or patches on the fly. Although if you want to go a step further, a Bluetooth pedal called AirPedal from AirTurn will wirelessly control your app patches, adding single-, dual- or four-button pedals that you can also use in a variety of other apps. 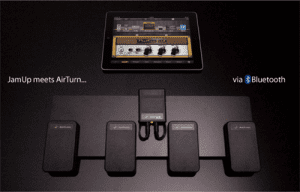 Most apps come with standard features like a tuner, metronome, VU meters for levels, recorders, music players or rhythm tracks. JamUp adds some extras like “Jam,” an audio player that comes with a playback speed like the Windows Media Player, so you can slow down music without changing pitch. It’s great for learning complicated, fast riffs. You can set loop points for repeating a section or even change the entire pitch in half-step increments, tuning the music to you, instead of your guitar to the music. This is very helpful when you’re learning cover tunes with tunings in E, Eb, D, etc. In the player, you can load any music on your device such as jam tracks to material you’re learning, and it interacts with Garage Band seamlessly, too.

There’s also a sampler, so you can record quick tracks or import music to create loops to build a song fast. Either version, XT or Pro, comes with an 8-track recorder with two unlocked tracks, and you can upgrade to an extra six tracks for $4.99. Also, the sample is set up well for easy sharing of what you create. 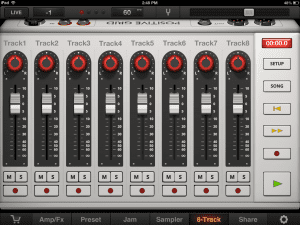 How about for a tone report and using it for live gigs or recording? I am already using it at rehearsal, where we record often to get some quick reference of material we’re creating. I am also daring myself to try it live, and honestly, I want to see what I can get away with — the most important detail is just getting your patches well worked out in advance.

I must say, it’s put a smile on my face, and it’s proved to be a very cool tool for fast creative combustion, my motel rig, traveling light, potential live rig and capturing ideas on the fly. It’s truly got my attention, and I can easily say it’s worth the money if you already have a device it can run on. Actually, hands down, it’s well worth the investment, and anything is possible with a little thought.