Over a year ago, my band MGB (Mean Gene Band) directly routed everything to our PA system to avoid neighbor or family disturbance. These noiseless rehearsals benefited us by being able to leave practice with our ears intact. Another plus: It also helped us learn how to get a good tone with zero volume (see my earlier video article), hear crystal clear the definition of all instruments and use multitrack recording for quick reference or multimedia use, such as for audio demos or webcam footage.

These rehearsals catalyzed my most recent GAS (Gear Acquisition Syndrome) attack, and I made a move toward in-ear monitoring. At NAMM 2013, I purchased and was fitted for a set of Clear Tune Monitors-brand in-ears (CT-300 Pro triple driver monitors). The biggest part of this quest was figuring out gear wise how to take advantage of in-ear monitoring as well as deal with everything involved for live shows, home recordings and rehearsals.

A few months prior to this, PreSonus stepped in for an early introduction to the underlying quest. On New Year’s Eve 2013, my band played an event where the sound company was using one of these new PreSonus 24.4.2 Studio Live digital mixers. His mixer was set up right behind the drummer — no long snake out front, using all high-end powered speakers and walking around mixing sound from an iPad.

The pros and cons of in-ear monitoring

So prepping for in-ears, I contacted a buddy of mine Dave Holland, who was a long-time engineer for HEAR Technologies, which has been one of the originating companies to aggressively tackle in-ear monitoring. We discussed at length the pros and cons of the journey, with the primary goal of preserving hearing while enhancing the musical experience for not just for the in-ear user but for everyone.

I could have expanded our current PA system, adding a separate monitoring system to handle in-ears, essentially compounding more gear on top of our existing pile. Looking at the entire audio food chain, it includes mixer, mains, monitors, snakes, multiple amplifiers, cables, an outboard racks of equalizers and compressors, the monitor system, etc. You really have to have a truck or gear trailer big enough to haul it, then you wish you had roadies to help move, set up and operate the system. Plus, say the phrase “outdoor gig with subwoofers,” and you need more power plus an engineer. It becomes a bigger nightmare to orchestrate.

Adding digital to the mix 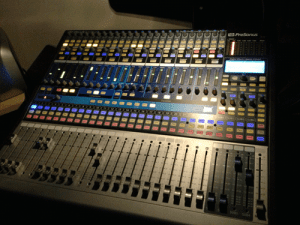 As Dave and I dove deeper into our conversation, he said about PreSonus, “These guys have basically blown everyone right out of the park. Their mixer has all your in-ear mixing problems already handled, not to mention, it works seamlessly with multitrack recording and live performances. You really should check into one, plus all the software and apps are free.”

So I do my homework as well as look hard at the mass of accumulated PA and recording gear becoming dated and harder to get rid of. I decided to make the flip and have been very impressed with the power and sheer abilities of today’s modern PA/recording gear. To be able to capture 24-track live shows weekly is a lot easier than getting the band together for four or five days in the studio. This way, we can keep what we like and replace other bits to create a fast product, and we all learn much more, getting to hear what we do. The shorter that time frame is between play, record and listen, the faster we develop musically.

Our prior PA system used un-powered speaker cabinets, multiple power amps, a lot of cables, racks of outboard gear — it had a lot of size and weight. I am blown away today at the small size, light weight and huge power capabilities of the QSC powered speaker line (K12s and Ksubs, in this case), 41-pound speakers with 1,000 watt built-in amps. Merging that with the PreSonus 24.4.2 and a Mac laptop opens the band up to an iPad for a portable mixer controller, and each band member can use an iPhone to control his own personal stereo monitor mix for in-ear monitors or a floor wedge.

The mixer can store 99 scenes, which equates to recalling your exact mixer settings every time you return to a specific venue, or saving the mix per song or per band for multiple act venues. By using a Firewire connection to your laptop, the mixer presets all recording levels so all you do is hit record for instant 24-track recording. The mixer is loaded with EQs and compressors that could equal a 90-space outboard rack and be assigned quickly to each channel, sub groups, mains or auxiliary monitoring mixes independently, along with two built-in digital effects. It makes use of what they refer to as a “Fat Channel,” which allows you to see EQ, Compressor and Expander for each channel on one global center viewing strip, and all knobs act like your old-school analog knobs. They’re just a lot easier to twist than the knobs on those old-school boards.

I am still only in the very beginning of this quest, waiting for the final in-ear gadgets to show up and go to work. We’ve had two gigs so far with the mixer, and it makes our setup faster. What seemed like a very complicated mixer turned out to be rather simple to operate in a very clean, efficient package. So my hats off to QSC speakers and PreSonus mixers for a package paired in gear heaven.

As for my in-ear monitors, those will have to wait until the next issue. There is a lot of rather heated debate and controversy on how they can cause singers to sing sharp or flat, the same issue that can occur with headphones, based on volume levels. With in-ears, as your jaw moves, it changes the shape of your ear canal and can alter your perceived pitch. I think the most important benefit of using in-ear monitors is to preserve your hearing.

If I were to continue playing into a 100-watt half stack for another 10 years, my hearing would become much more compromised than now, so I am trying to extend and preserve what I have left. I would love to say goodbye to all those gigs that have ended in an ocean of noise in your head … as you lay your head on your pillow and try to go to sleep …