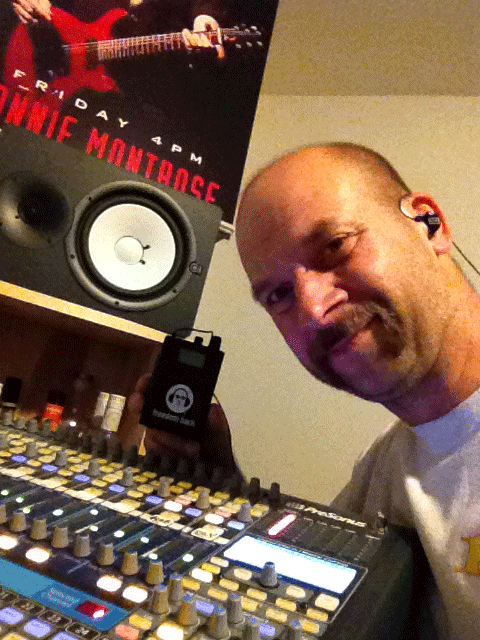 The journey into using in-ear monitors is anything but simple, raises controversy and requires techniques to work effectively. Over the past few months since I wrote “Disturbing the Peace” Part 1, I have had some time to get used to the benefits of in-ear monitors and have overcome some hurdles and so I would like to share what I’ve learned so far. 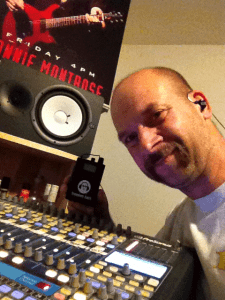 I am starting to see in-ears appear in the local bar scene, which shows how much interest there is, and I see how many people struggle to get comfortable with the change from floor wedges. You can watch almost any music-related TV show or concert and see that this is the way most vocalists are headed. But be prepared to proceed with caution, an open mind and an open wallet!

If you are considering trying out in-ear monitoring, figure out what you want to hear and how many players you need to feed. The more players you need to send an individualized mix, the more it will require a mixer with plenty of monitor/auxiliary sends. Also, are you happy with a simple mono mix, or do you need a stereo mix? The more people using in-ears on your stage, the more complicated it can become.

So far in my testing, we have kept it rather simple, as our drummer and I are the only two on stage using in-ear mixes, while the bass player and singer use floor wedges.

As a guitar player, I have approached a few smaller venue gigs with a silent guitar rig that directly hits the PA or bigger bar gigs  I may use a speaker cab. A silent rig requires either a load box such as the Aracom PRX-150 Power Attenuator, Palmer DI Box, Two Notes or other known attenuator/load boxes or a simple Line6 POD HD500. Running a silent rig makes it harder to get that singing Santana feedback and can leave a guitar player missing the feel that a speaker cabinet offers when it hits you in the pants.

You can achieve easy feedback control using a very small amplifier that has nothing to do with the PA mix. You can use something like a little Fender Champ practice amp at your feet, like a floor wedge for easy point, aim and feedback control or remember the Sustainiac? It’s a key buy in this situation.

The main concept is keeping the stage volumes low so a soundman can do his or her best job at getting you a fat, front-of-house mix. If you’re a guitar player, in-ears allow you to hear yourself well, but I highly suggest using them in conjunction with a speaker cabinet for the feeling you’re used to from a real amplifier and speaker. If you’re a vocalist, in-ears let you hear your vocals at all times, but you also need a great mix of the rest of the band in your head or you don’t get the full effect of the sound. Also, it’s just like being in a recording situation — if your vocals are too loud or too quiet in comparison to the rest of the band, that can often cause a singer to sing sharp or flat.

One problem associated with in-ear monitors is communicating with the band or the audience between songs, because you only hear what comes into your in-ears. This can be overcome by adding a communication microphone assigned only to the in-ear monitor mix, so someone requesting a song actually speaks into this mike. You could mute this stage mike when not in use or use it to capture the general stage sound and add it to your in-ear mix.

One prime concept of in-ear monitoring is for you the musician to hear what the audience hears. To do that, you need to actually place microphones in the audience, which is easier said than done for some bands. For bigger bands, you can place mikes out front with the sound man. For local bar bands, this becomes a little more complicated because you have to try and place mikes in a safe, remote location where they will serve their purpose, and you need to deal with long cables or use a wireless unit.

Crown PZM Series microphones work very well to mike the front of the house, as you can place them almost anywhere and capture a wide picture of your sound. This is the best method for getting a great mix for any band member. Then for individualized mixes, you just blend in a little extra of whatever the player wants to hear, which is usually a little more of the player over the rest of the band mix. The more mikes you have on the band, the better chance of getting a great in-ear mix.

Which brand is best?

In-ear monitors are available in a wide variety of brands — everything from single-driver to quad-driver in-ear models, which can help add more bottom end to what you hear. To be mobile, you pretty much have to have a wireless unit such as Hear Technologies Freedom Back wireless system, which plugs into any monitor/auxiliary send.

You can find in-ear monitors for as low as $100 to well over $1,200. A few musicians say some low-priced single drivers for under $200 sound great, like the Future Sonics Atrio Series that doesn’t require an ear mold. Expect to spend about $400 to $700 for a decent set of custom-fit in-ears, and it will take you a few months to get them into action. I ended up with a pair of Clear Tune Monitors CT-300Pro triple drivers, which sound very nice and full.

Most in-ear monitors need to be molded to fit your ear for maximum sound benefit, and dealing with the mold process can be time consuming and may not come out right the first time. If you’re serious, don’t give up. I had to send my in-ears back once due to a slight mold shape problem, and CTM quickly adjusted and returned them within a week.

Keep in mind that you don’t have to use in-ear monitors. You could use headphones or iPod ear buds — these all will sound very different. Guitar players such as Paul Gilbert, for example, swear by Extreme Isolation headphones for live use.

In-ear monitors are intended to protect your ears over the long haul by allowing you to reduce the volume to your ears. Yet, you need to take one major precaution: A limiter is a mandatory item to protect your ears by setting a maximum volume limit so your head isn’t blown clear off by an accidental knob or button issue. Use a limiter!

Getting the right mix

PreSonus has addressed all your needs for developing the mixer of the future with their Studio Live Series mixers. I am starting to see more and more working-level local bands invest in this technology, as it’s the future, and it’s here now. These mixers replace racks of effects, compressors, equalizers, limiters, hundreds of feet of cable, snakes, etc.

Plus, they heavily address in-ear monitoring by providing you with all the auxiliary/monitor channels you need. The small PreSonus 16.0.2 mixer is a great mixer for 99 percent of all local bar bands and can handle four monitor sends. One aux mix could be floor wedges, and another could be a mono in-ear feed for the lead singer.

If more people are happy sharing the same monitor mix, you can buy any simple headphone mixer for under $50 and split off the same mix to four players. Or if you need more monitor mixes, the PreSonus StudioLive 16.4.2 mixer handles up to six monitor mixes or the PreSonus StudioLive 24.4.2 handles up to 10 mixes. Best yet, these mixers are programmable, can connect with FireWire to a computer for live multitrack recordings, are wireless for iPad front-of-house mixing, and they let players adjust their own monitor mix via a smart phone. Too cool.

Sure, it’s much easier just to hit the stage with a pair of floor wedges and no sound man and just “go.” To truly make best use of in-ears, you need to do a good amount of rehearsal to dial the levels and label the board, so come gig time, you’re not stressing and trying to fix a mix. Once you do this homework, your set-up time at any gig can go very fast.

Props to the soundman

With the advancement of today’s technology, I truly believe the soundman is more important than ever at a local bar scene level. To get the most out of today’s gear, you truly need someone operating your gear so you can play and perform your best. It can make all the difference between making a band sound OK to really good using the same gear.

How many times have you found yourself telling some bar band, they need to turn this up or down or kill the overbearing effects on the singer, all because they can’t hear what’s happening out front? I encourage all bands that care about their sound to embrace the soundman. That person is just as important as you are.