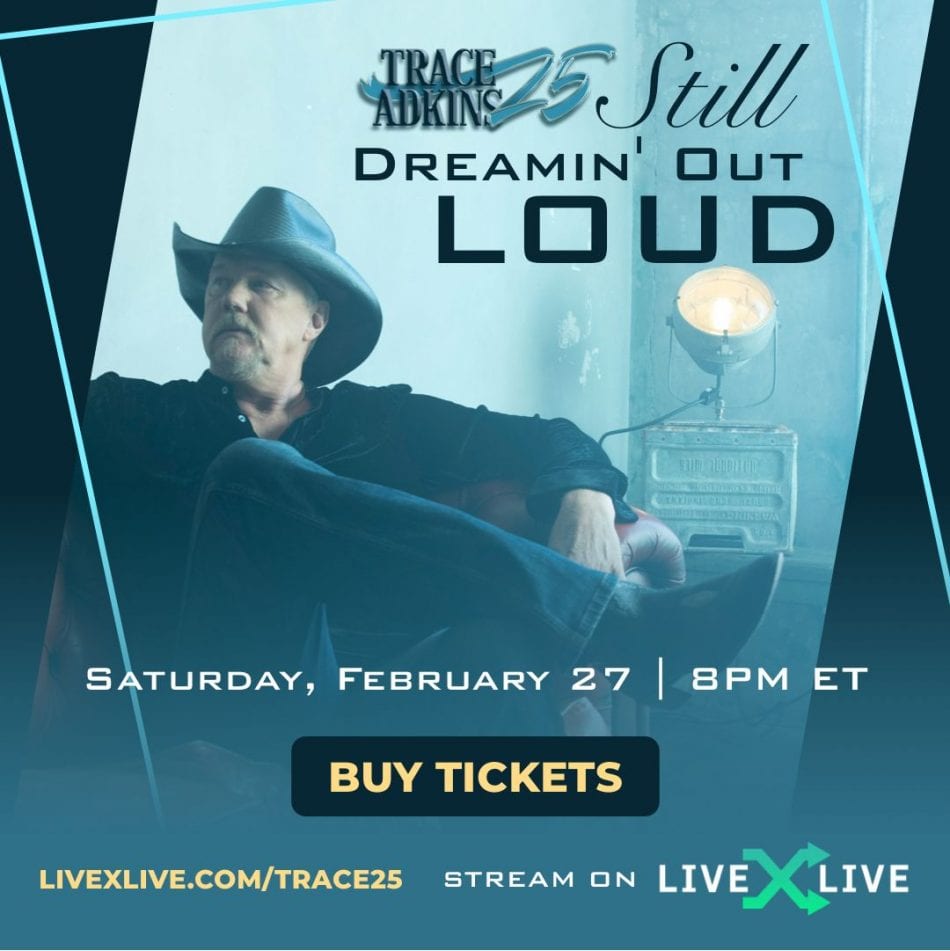 Hosted by CMT Radio Live’s Cody Alan, Adkins will commemorate his 25 years in entertainment featuring hits spanning his entire career, including “You’re Gonna Miss This,” “There’s A Girl in Texas,” Every Light in the House,” and more, live from Franklin, Tenn., while chatting with Alan about some of the history and stories behind the songs.

Ticket packages for LiveXLive’s livestream of Trace 25: Still Dreamin’ Out Loud are available starting at $14.99, offering 24-hour re-watch, t-shirts, koozies and more. There are also a limited number of VIP packages including a digital meet and greet; and a select number of VIP + guitar packages, including the option to have a guitar autographed and personalized during a virtual meet and greet.

“It’s an honor to partner with LiveXLive for my first ever livestream!” shares Adkins. “Throw my buddy, the incomparable Cody Alan, into the mix, and there’s no doubt it will be a great time.”

Dermot McCormick, President of LiveXLive stated “Trace’s talents transcend contemporary country music and LiveXLive is excited to help bring him and his 25 years of performing to audiences worldwide. He has a special connection to his fans and this concert will bring him and his audiences together in a unique way through an exclusive and special PPV.”

In October 2020, Adkins celebrated the release of his Verge Records EP Ain’t That Kind of Cowboy with a special performance of lead single “Better Off” from the Grand Ole Opry on NBC’s “TODAY with Hoda & Jenna.” “Better Off” was released in spring of 2020 and has since garnered over 8 million streams.

About Trace Adkins
Towering baritone Trace Adkins has sold more than 11 million albums and charted more than 20 singles in his 25 years in Nashville, a remarkable run for one of country music’s most easily identifiable stars. With over one billion spins on Pandora (10 million per month), one million followers on Spotify and nearly 200 million plays on YouTube, the Louisiana native has released his latest EP Ain’t That Kind of Cowboy via Verge Records, following his 12th studio album Something’s Going On in 2017. A three-time GRAMMY Award nominee, Adkins has won three Academy of Country Music Awards, including the 2009 Single of the Year Award for “You’re Gonna Miss This” and Vocal Event of the Year with Blake Shelton for “Hillbilly Bone” in 2010. The Grand Ole Opry member is also an author and spokesman for the Wounded Warrior Project and The American Red Cross, for whom he raised more than $1.5 million dollars as the winner of NBC’s All-Star Celebrity Apprentice. In recent years, Adkins has performed for U.S. service members across 12 USO Tours. In his 2007 autobiography, A Personal Stand: Observations and Opinions from a Freethinking Roughneck, Adkins recounts his rise to fame, brushes with death and battles with personal demons. Adkins has also acted in multiple films and television shows, playing a tough-as-nails biker in “The Lincoln Lawyer” (starring Matthew McConaughey), a desperate father in “Deepwater Horizon” (starring Mark Wahlberg), a wise oracle and tattoo artist in the family friendly film “Moms’ Night Out” (starring Patricia Heaton, Sean Astin, Sarah Drew) and as MercyMe’s real-life manager, Brickell, in the box office smash “I Can Only Imagine.” The film was the third biggest selling movie on its opening weekend in America. His latest role was as a grandiloquent former general in the film “Badland,” which was released in select theaters and on Amazon Prime Video and Apple TV in November 2019. For more information and announcements, visit http://www.traceadkins.com/ or on Twitter, Facebook and Instagram @TraceAdkins.

About LiveXLive Media, Inc.
Headquartered in Los Angeles, California, LiveXLive Media, Inc. (NASDAQ: LIVX) (the “Company”) (pronounced Live “by” Live) is a global platform for livestream and on-demand audio, video and podcast content in music, comedy, and pop culture. LiveXLive, which has streamed over 1,800 artists since January 2020, has become a go-to partner for the world’s top artists and celebrity voices as well as music festivals concerts, including Rock in Rio, EDC Las Vegas, and many others. In April 2020, LiveXLive produced its first 48-hour music festival called “Music Lives” with tremendous success as it earned over 50 million views and over 5 billion views for #musiclives on TikTok on 100+ performances. LiveXLive’s library of global events, video-audio podcasts and original shows are also available on Amazon, Apple TV, Roku and Samsung TVs in addition to its own app, destination site and social channels. The Company’s wholly-owned subsidiary, PodcastOne, generates more than 2.25 billion downloads per year with 400+ episodes distributed per week across a stable of hundreds of top podcasts. For more information, visit www.livexlive.com and follow us on Facebook, Instagram, TikTok, Twitter at @livexlive, and YouTube.

Forward-Looking Statements
All statements other than statements of historical facts contained in this press release are “forward-looking statements,” which may often, but not always, be identified by the use of such words as “may,” “might,” “will,” “will likely result,” “would,” “should,” “estimate,” “plan,” “project,” “forecast,” “intend,” “expect,” “anticipate,” “believe,” “seek,” “continue,” “target” or the negative of such terms or other similar expressions. These statements involve known and unknown risks, uncertainties and other factors, which may cause actual results, performance or achievements to differ materially from those expressed or implied by such statements, including: the Company’s reliance on one key customer for a substantial percentage of its revenue; the Company’s ability to consummate any proposed financing, acquisition or transaction, the timing of the closing of such proposed event, including the risks that a condition to closing would not be satisfied within the expected timeframe or at all, or that the closing of any proposed financing, acquisition or transaction will not occur or whether any such event will enhance shareholder value; the Company’s ability to continue as a going concern; the Company’s ability to attract, maintain and increase the number of its users and paid subscribers; the Company identifying, acquiring, securing and developing content; the Company’s ability to maintain compliance with certain financial and other covenants; the Company successfully implementing its growth strategy, including relating to its technology platforms and applications; management’s relationships with industry stakeholders; the effects of the global Covid-19 pandemic; changes in economic conditions; competition; risks and uncertainties applicable to the businesses of the Company’s subsidiaries; and other risks, uncertainties and factors including, but not limited to, those described in the Company’s Annual Report on Form 10-K for the fiscal year ended March 31, 2020, filed with the U.S. Securities and Exchange Commission (the “SEC”) on June 26, 2020, Quarterly Report on Form 10-Q for the quarter ended September June 30, 2020, filed with the SEC on November 16, 2020, and in the Company’s other filings and submissions with the SEC. These forward-looking statements speak only as of the date hereof and the Company disclaims any obligations to update these statements, except as may be required by law. The Company intends that all forward-looking statements be subject to the safe-harbor provisions of the Private Securities Litigation Reform Act of 1995.