What began as a statement of religious hypocrisy ended in screaming silence. Life met art when Green Day performed their song, “East Jesus Nowhere,” live against a video backdrop that included Dereck Seltzer’s “Scream Icon” during stops on their 2009 tour.

In an effort to capture the meaning of “East Jesus Nowhere,” Green Day’s videographer included a photograph he took of a wall filled with graffiti at the corner of Sunset and Gardner Avenue in Los Angeles. The wall had an image of the “Scream Icon,” which he modified by painting a large red cross over the face and painting black streaks down the right side of the face. With the “Scream Icon” photograph as the focal point, the videographer filmed the wall over several days, capturing more graffiti and tagging on the wall, and then created an accelerated version of the video, which played during the punk band’s live performance of the song. 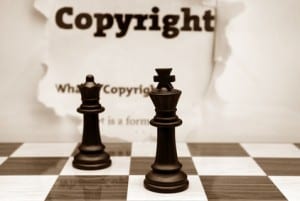 The U.S. Ninth Circuit Court of Appeals stated that, “The fair use doctrine ‘permits and requires courts to avoid rigid application of the copyright statute when, on occasion, it would stifle the very creativity which that law is designed to foster,’” citing Campbell v. Acuff-Rose Music, Inc. in 1994 (510 U.S. 569, 577). The court reiterated that fair use of a copyrighted work is not an infringement of copyright and provided the four factors in Title 17, Section 170 of the U.S. Code to consider:

Citing the U.S. Supreme Court, the Ninth Circuit stated that the central purpose of the first factor is to see “. . . [W]hether and to what extent the new work is transformative. Works of this type lie at the heart of the fair use doctrine’s guarantee of breathing space within the confines of copyright, and the more ‘transformative’ the new work, the less will be the significance of other factors.”

Seltzer admitted that the “Scream Icon” addressed “themes of youth culture, skateboard culture, (and) insider/outsider culture.” Whereas, Green Day argued that the image was used as raw matter to create something new – specifically, the addition of the painted cross surrounded by images of other religious iconography to convey the new meaning of hypocrisy of religion in the song. Therefore, the commercial use under the first factor was also determined to be incidental because the image was not used to sell show tickets, CDs and/or merchandise.

Under the second factor, the court determined that while Seltzer’s art merited stronger copyright protection because of its creativity, it had also been widely published and his artistic expression had already occurred.

The third factor focused on the quantitative and qualitative amount of the original work used by Green Day, which the court found to be substantial. However, the court also noted that the entire image was necessary to achieve the new expression Green Day sought.

The fourth factor also favored Green Day, mostly based on Seltzer’s testimony that the value of his work had not changed, nor had anyone told him he or she would not buy his work because of Green Day’s video. Also quite persuasive was the fact that the modified “Scream Icon” was not placed on CDs and merchandise and other promotional material for sale, and was only used in one song during a three-hour touring show.

The court stated that The Lanham Act (U.S. Code Title 15, Section 1125) extends liability to any person who “uses in commerce any word, term, name, symbol, or device . . . which is likely to cause confusion, or to cause mistake, or to deceive as to the affiliation, connection or association of such person with another person . . . .” However, the district court had already concluded that Seltzer had failed to provide sufficient evidence of establishing the “Scream Icon” as a trademark in the sale of his goods or services.

On both copyright and trademark claims, Seltzer’s “Scream Icon” claims fell on deaf ears and lost on Green Day’s motion for summary judgment. The only saving grace was that the Ninth Circuit Court of Appeals ruled that Seltzer’s lawsuit wasn’t frivolous, removing the burden of paying for Green Day’s attorney’s fees. After paying for his attorney’s fees and costs, though, Seltzer just may feel like an “American Idiot”.