The words “my lawyer” or “contractual obligation” often substantially increase heart rates, blood pressure and anxiety levels. This is particularly true for those engaged in the entertainment business. We’ve all heard war stories from bands that signed their away rights, for pennies, to numerous future albums or unknowingly transferring copyrights, royalties and more. 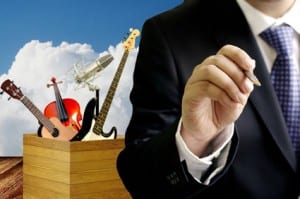 In today’s music era, these rights and derivative rights for such things as DVDs, sync rights for film and TV, phone and computer apps, trademarks and software games bring in much more coin than the tune or a performance. In fact, they’re the musician’s lifeblood, which is why a serious musician should learn about contracts with the same veraciousness as a cancer patient learns about alternative treatments.

That’s not to say you should spout out “legalize” like Julian Coryell spits out guitar notes — both take years of intensive study to learn and master. But just as easily as you can learn basic guitar chords, you can understand the basics of contracts.

Familiarizing yourself with contractual verbiage — just as the newbie guitar player learns about strings, frets, tuning and picks —will help with booking gigs at the local water hole, signing the best management contract and earning a decent sum from iTunes or Spotify agreements.

What is a contract?

According to the Lectric Law Dictionary a contract is:

(1)  An agreement between two or more competent parties in which an offer is made and accepted, and each party benefits. The agreement can be formal, informal, written, oral or just plain understood. Some contracts are required to be in writing to be enforced.

(2)  An agreement between two or more parties which creates obligations to do or not do the specific things that are the subject of that agreement. Examples of a contract are a lease, a promissory note or a rental agreement.

For a contract to be formed, there must be a  meeting of the minds between or among the contracting parties. That’s a big reason why minors and the incapacitated get to void their contractual obligations.

Additionally, there needs to be an offer and acceptance among the parties. To a certain extent, that’s easy to spot in a signed agreement, but many times the parties do not state with specificity all the services expected of each of the parties. If the contract verbiage is nebulous or too general, the likelihood for a dispute over performance of services increases substantially.

That’s why oral contracts can be so dangerous — especially when there is a great deal of money or other risk at stake. First, there’s the interpretation of whether a contract was formed — was there a clear offer and clear acceptance (“I will sell you my Les Paul for $5oo,” and “Yes, I will buy it”)? Or was it more nebulous, such as a wink of the eye, or a high-five without an oral response or something similar? Was it 500 pesos or dollars? There are so many opportunities for misunderstanding.

Therefore, it’s always best, if possible, to write, with particularity, what each party is expected to do and the timeline in which they are expected to finish their contractual duties. In some cases, the contract should include a penalty provision if the parties don’t complete their duties by a certain date; otherwise the project may linger forever.

The Statute of Frauds

For these reasons and many others, there is the Statute of Frauds, which we stole from the Brits in the early 1600s. The aim was to minimize the potential for fraudulent activity, such as the person who claims you gave her your house, or the lost family member who claims he was the bastard child of Sammy Walton and seeks his share of the will, and a host of other areas ripe for fraud. Some states may require a written contract for goods valued at more than $500, to be married, for the transfer of rights in any real property or to be listed as a guarantor for another’s debt.

Additionally, the subject matter of the contract must be for something new — not for something already provided or for services already expected (police and fire assistance, etc.).

Lastly, the quality of the work or services provided can be based on industry standards to determine whether someone performed appropriately. This includes drycleaners, car washers and massage parlors — services not specifically stated but certain quality standards expected.

Entertainment contracts can be simple or complex, from an artist representative agreement to a record deal. Fail to learn the contract basics, and you will unlikely be rubbed the wrong way and not have a happy ending.

A lawyer, professor, artist manager and three-chord groovemeister, Stephen “Scoop” Stern returns to his jaded journalistic roots for Music Insider Magazine. Raised in Los Angeles and based on the Central California Coast, Stephen is also partner in Rockers Collective, comprised of all-star musicians from the world’s most famous bands; and The University of Rock and Roll, which provides Rockin’ Keynote Speakers, corporate team-building, experiential programs, master classes, recording camps and more. Prior to his work in law, business and music, Stephen earned a bachelor’s degree in journalism and published articles in a variety of newspapers and magazines.