Blacklist Union – Til Death Do Us Part 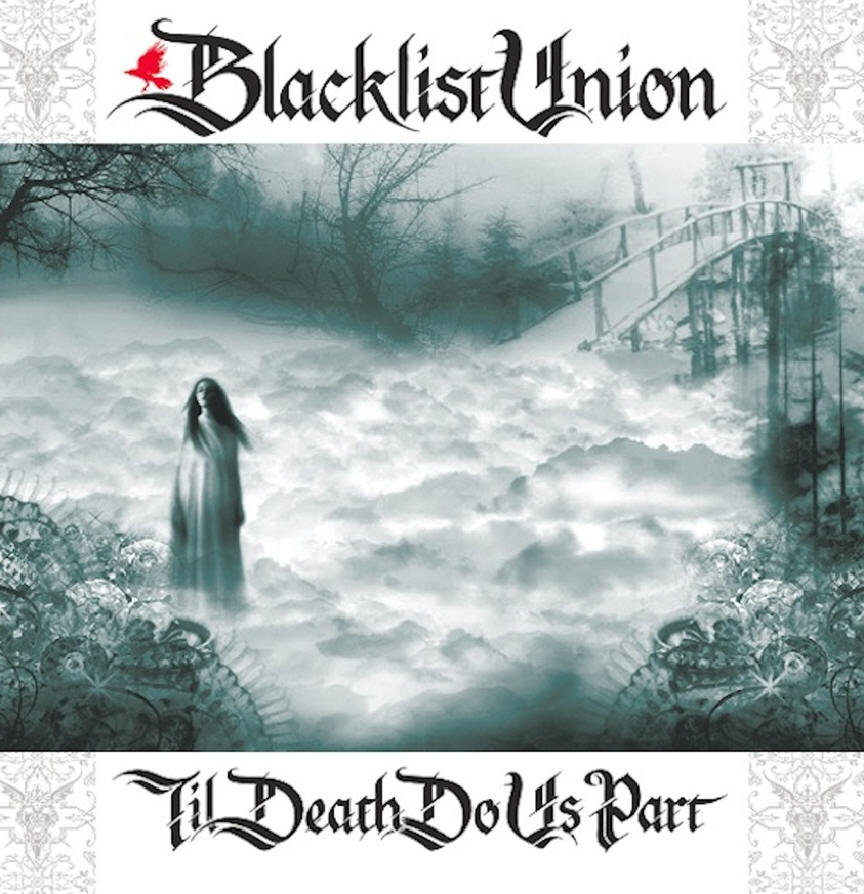 Blacklist Union isn’t really a band so much as it is whatever singer Tony West decides it is. With two previous CDs in the can, and his latest project, “Til Death Do Us Part” just released, Tony has concocted an interesting mix of musicians to round out the roster for this current incarnation of Blacklist Union. The new CD includes such luminaries as Hunt Sales (David Bowie’s Tin Machine and Iggy & The Stooges) on drums, Anthony “Trouble” Valli from Crazy Town, Todd Youth of Danzig, and members of the band Saliva. 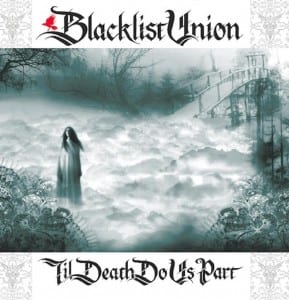 The album starts off with ‘Alabama Slammer’, and has a good opening riff. The vocals are a bit on the nasally side, but then so was Axl Rose. The rhythm guitar and bass work is solid, as is the song structure. The guitar lead is subdued, but appropriate for the song. The overall feel of the song is upbeat, and a little bit formulaic, but it still starts this CD off on a solid note.

The title track, “’Til Death Do Us Part” is interesting for its strange, almost creepy “Ah’s” as backing vocals. It gives the song an almost morose feel that is in stark contrast to the verses, but fits in well with the heavier guitar tones and more powerful vocal parts that make up the chorus. It’s an interesting track, if not thoroughly enthralling.

“Blown Away” has a more complicated dynamic to it, both with the vocal performance and the guitar parts — they’re more nuanced on this track than the previous songs. I like the way the lead guitar cuts through with a definite boost in the verses, instead of leaving it to the leads alone. Truthfully, the guitar fills in the bridge between the verse and the chorus is nicely done in a very subtle manner, which adds to the overall dynamic and feel to this track. The vocal performance stands out on this track as being very powerful, as well as ‘believable’ in the sense that you never question the passion in which it is performed.

The quality of the drum tones on this next track, “Game Over” really stand out. There’s nothing at all complicated about the drum part itself, but the great drum tones on this track must be pointed out. Someone in the engineering booth knew what they were doing when they tracked the drums, because they sound very natural and full, and aren’t gated to death. Just good engineering technique and a solid drummer in Hunt Sales will do that for you every time. The rest of the song album is equally well engineered and not over-produced. It’s a good balance of sound that has been struck on this album, so my hat is off to producer, Chris Johnson (Evanescence, Goldfinger) for his good work on this album.

“Same Ol’ Pressure,” I hate to say, isn’t really doing it for me from a vocal standpoint. It’s a bit monotonous and droll, but the music itself is quite good, particularly the guitar and drum tones, and the interesting bass line — it’s very full, and forcefully played. I think more could have been done with this song, concerning the vocals and lyrics. They are a bit flat, and I can’t speak to whether it’s what they were going for in the studio, or if the vocal performance was just a bit off in the energy department, but this could possibly be the one weak point in the production of this album. That being said, I’m sure that their fans will be quick to disagree…

“Diggin’ 4 Gold” is a song that starts off right! I can sink my teeth into the groove they’re setting up for the listener in the beginning of this track, with the extremely catchy guitar riff, and the thunderous guitar and bass punctuations, leading into a nice and chunky guitar riff that accompanies the Ozzy-like vocals of the verses. This is what I call “Driving Music”! It’s the stuff you crank in your car with the top down, blazing down the Pacific Coast Highway. It grooves from the very first riff, and the whole song is firing on all cylinders, especially the guitar lead part — it smokes without blasting out too many notes for the listener to appreciate, let alone hear. The breakdown sections are effective, and add a darker feel to the song before it rockets back down the PCH to the Hollywood Hills. Good stuff, this!

“Feed the Snakes” has a brighter guitar tone to it, that gives this song a bit more of a pop/schlock-rock feel to it, and consequentially it is my least favorite song on this album. It leans a bit too much towards the nonsensical sleaze rock of the late 80’s, of which, admittedly, I am not a big fan of. Still, there are things about this song that are noteworthy, those being the incredible guitar tones and the well-played guitar lead and fills. This is a throw-away track — some will love it; others, not so much.

Don’t be dismayed by that last track, though. With the next song, “I Do,” West redeems himself with a powerful vocal performance, as well as some seriously killer clean guitar tones on the verses. The bass and drums cut through, clear as crystal and big as a mountain. These are the kinds of drum and bass tones that rhythm players kill to get on their recordings, so once again, my hat is off to the producer, Chris Johnson.

I can’t speak to what inspired Tony West to pick INXS’s classic pop rock mega-hit, “Don’t Change” as a cover tune to add to this album, but whatever it was, it works — sort of. The fact that instead of saying, “What the fuck was he thinking?” I instead thought, “Well, isn’t that an interesting choice for a cover song?”, I think speaks more to the fact that the original INXS song was such a fantastic pop song that it will survive anyone’s cover of it — good or bad. The band does their part in this reproduction very well; inasmuch as they do justice to the original INXS song. I’m just not exactly sure that this particular song is a good fit for West’s vocal style or abilities. His voice isn’t as strong on the lower register as Michael Hutchence’s voice was, and Hutchence’s voice was fuller in the lower register as well. Still, to West’s credit, he didn’t butcher the vocals, and did a respectable job of it — but I don’t think he quite hit the mark, either. As I said earlier, it’s an interesting choice for a cover song. You decide.

I don’t know what to make of the title of this next track, but it’s called “The Lick Kitty Split Theme Song,” other than the obvious double entendre. Aside from that, this is a most forgettable track. It seems destined to be the next favorite at your local Brass Rail strip joint, the local nubiles thrusting and writhing to the beat in expectation of your ‘tips’. I don’t like to dismiss any song on an album out of hand, but with this one, I really want a do-over. It’s nonsense. The vocals grate on the ear, and that’s about it. The music itself, sans vocals/lyrics, isn’t a bad composition. It’s the droning vocals on this track that make it instantly dismissible and forgettable.

West and his Blacklist Union close out this album with another droning vocal effort in “I Don’t Love You Anymore,” an otherwise strong mid-tempo love ballad that would work better if the vocals had more of a melodic line than they took with this track. The guitar lead is quite musical, and fits the sound and feel of the song. The drums and bass parts both groove appropriately. The two critiques for this track that are most obvious are that the bass track is just a smidgen too far in front of the mix — something you will rarely ever hear from me — and the other thing is that the mix seems a bit cluttered on this song, and it’s the only song on this album that feels that way. For me, it’s a mystery how that happened with a guy like Chris Johnson at the helm. Still, I guess you can’t win them all, huh?

My overall analysis boils down to this: if they had stopped this album at the first nine tracks, even including the ‘interesting’ choice to cover INXS’ hit, “Don’t Change,” I would have given this album an 8.5 — 9 Skulls rating. However, because of the seriously glaring weakness of the last two tracks’ vocal performances, I am forced to give an album I otherwise thoroughly enjoyed, a merely above average rating of 6.5 Skulls. I really do believe that the last two tracks detract significantly from the overall success of this album as a whole. I hope that it won’t detract from the success of the rest of the songs on this release, because there are some good songs on here that are worth listening to and enjoying.

In all fairness to the band, and West also, his voice really is limited to the higher vocal registers, and it was the vocal performances on the last two tracks that were the main detractor on the two songs I panned on this release. The rest of the album may be worth you plunking down your dead presidents for, but I’ll have to leave that decision up to you.

If you can forget and forgive the last two tracks on this release, then I’d say that this is worth the price of admission. It’s a good album, except for the last two tracks. I would have expected more in the vocal department from a guy like Tony West on his third record release.

You can find Blacklist Union on Facebook, ReverbNation, and you can buy their latest album on iTunes.